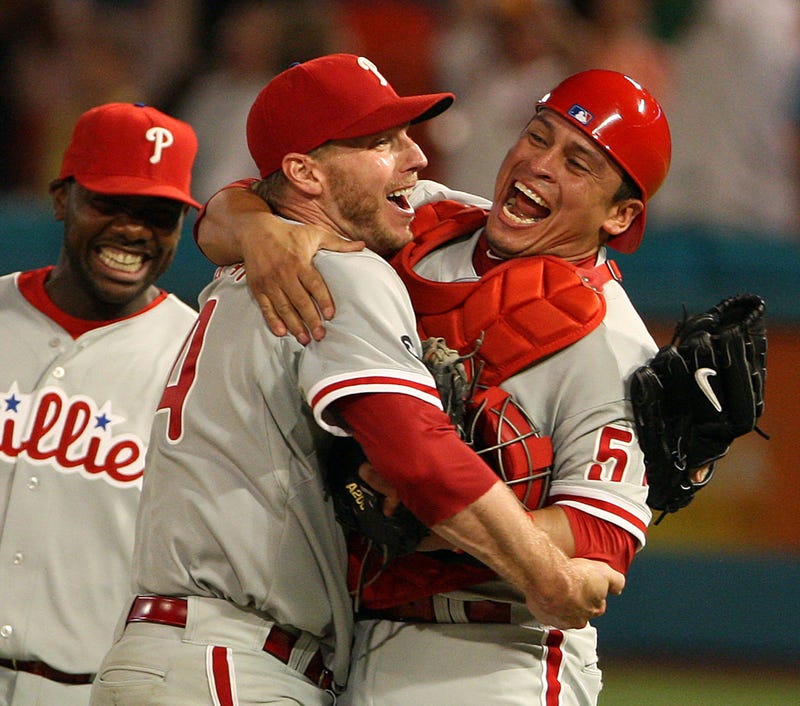 PHILADELPHIA (KYW Newsradio) — It was only his 11th start of what ended up being 103 with the Phillies. He just came off arguably his worst outing of the season — six earned runs in 5 2/3 innings against the Red Sox at Citizens Bank Park.

“Roy actually went into that game with a little bit of a chip on his shoulder,” said MLB.com’s Todd Zolecki, author of the new biography “Doc: The Life of Roy Halladay.” “He wanted to kind of shut up the critics and silence the questions that were being asked. … He had a little bit of an extra edge going into that start that night in Miami.”

Halladay put together a masterpiece.

For 26 straight batters, the Marlins had not reached base. Ronny Paulino was Miami’s last chance. Halladay would not be denied.

“The wind,” Phillies broadcaster Scott Franzke said on 1210 WPHT that night. “The 1-2 pitch … swing and a ground ball left side. (Juan) Castro’s got it. Spins, throws, he got him!”

“A perfect game for Roy Halladay: 27 up and 27 down. Halladay is mobbed at the mound as the Phillies celebrate perfection tonight in Miami,” Franzke announced over the air with joy.

Halladay had thrown the 20th perfect game in Major League Baseball history in a 1-0 Phillies victory.

“I don’t know what to say. We felt like we got in a groove early, and about the fifth or sixth I was just following Chooch,” Halladay affectionately referred to catcher Carlos Ruiz on the Phillies telecast after the game. “I can’t say enough about the job he did today. Mix pitches. For me, it was really a no-brainer. It was once we got to the sixth — fifth or sixth — I just followed him.”

Zolecki remembers that Halladay, who was taking advantage of Mike DiMuro’s strike zone that night, and had a high pitch count after the first two innings. But afterward, he settled down.

“He really hammered home this philosophy of the next pitch, focus only on the next pitch,” Zolecki said. “Those 31 pitches that he threw in those first two innings — the three three-ball counts — once they were over with, they were done with.”

KYW Newsradio anchor Jeff Asch was vacationing with his family in Miami and bought tickets to that game, without realizing it would be Halladay’s turn in the rotation. Asch said his wife took an excellent picture of the last out, with Halladay in his follow-through and the ball on its way to the plate.

“The chances of being at a perfect game — the odds are certainly slim to none,” Asch said.

Asch called it the No. 1 sports moment he has ever seen in person. He saved all four ticket stubs and framed the picture his wife took. Asch said his family made a holiday card out of it, which Halladay was gracious enough to sign for him when Asch and the Philadelphia Sports Writers Association presented Halladay with his 2010 Cy Young Award at the PSWA’s annual banquet.

Halladay tragically died in a plane crash on Nov. 7, 2017, four years after his major league career was over. As time has passed since his death, it’s become public knowledge that Halladay had struggled with mental health and was addicted to painkillers by the end of his career, as well in the last years of his life.

Halladay’s widow, Brandy, has recently decided to share more details about the hardships Halladay faced as he battled injuries late in his career, as well as his tough transition to life after baseball. She shared it in Zolecki’s book as well as an ESPN E:60 feature, airing Friday night.

John Barr, an ESPN reporter who worked on the feature, joined Sportsradio 94WIP earlier this week and discussed why Brandy has become open about these private matters.

“I think Brandy really struggled with whether to make that part of his life public,” Barr said. “I think she did so because she wants to try to remove the stigma that surrounds some of these issues.