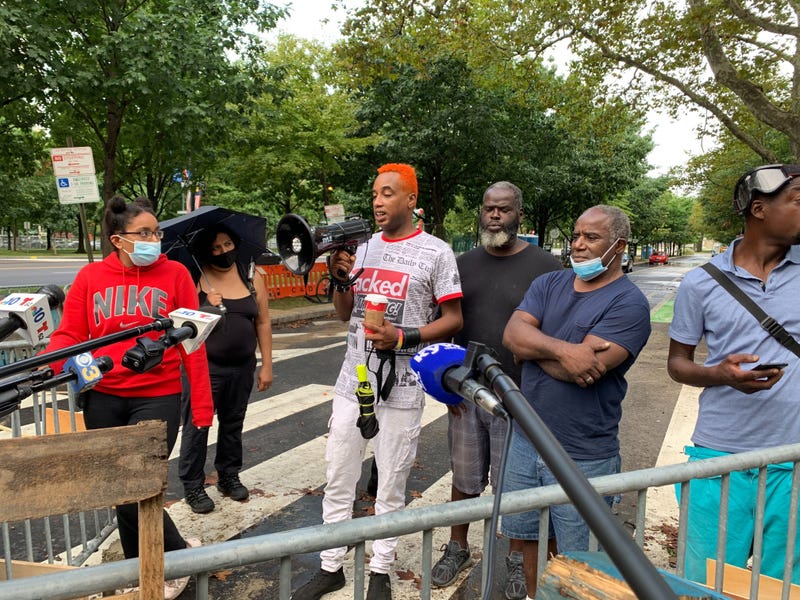 PHILADELPHIA (KYW Newsradio) — The homeless encampments in Philadelphia's Sharswood and Fairmount neighborhoods are still standing a day after the city's third order for protesters to leave went unheeded.

One difference: There are now more metal barriers at the site at 22nd Street and the Benjamin Franklin Parkway. Organizers extended the area they had blocked off. For example, outsiders can no longer pass through the Rodin Museum lawn anymore.

Many here at the encampment have been leery of any outsiders, but now they’re being even more vigilant, keeping a close eye on all entrances.

There were rumblings that police were going to come in overnight, so organizers took to Instagram to get more supporters to show up. They did, but police never came.

Henderson says the possibility of force being used to evict them is on the top of their minds, especially after seeing the Philadelphia Police Department tear-gas protesters on I-676, a few blocks away, in June.

"This city will not hesitate to tear-gas and use rubber bullets on peoplem," he said.

According to a statement released by the city, the goal is to solve this situation peacefully. Officials say they’ll continue outreach efforts, even if it takes a few days. Forcibly removing people is the last resort.

The city also expressed concern about protesters “stockpiling supplies to aid their resistance,” and cautioned nearby residents to stay away from the camps for the next few days.Henderson was incredulous: “Does it look like we’re stockpiling? Our preparation for resistance were the barriers.”

Organizer Dominique McQuade said, “I’m tired of hearing that narrative. Because we were just preparing for the police brutality that we literally, three months ago, we saw right there.”McQuade says the barriers will come down if Kenney sanctions the encampment instead of a city proposal to move it elsewhere.“We will stop disrupting these streets if he is willing to reopen negotiations and actually talk to us," she said, "not just offer us the same services that he keeps pretending will solve this problem.”The city says conditions at the encampment are unsafe, but organizers say the homeless people are better off there than at shelters, especially during the pandemic. They are demanding long-term affordable housing.

The city says some demands are impossible to meet, especially without federal funding.