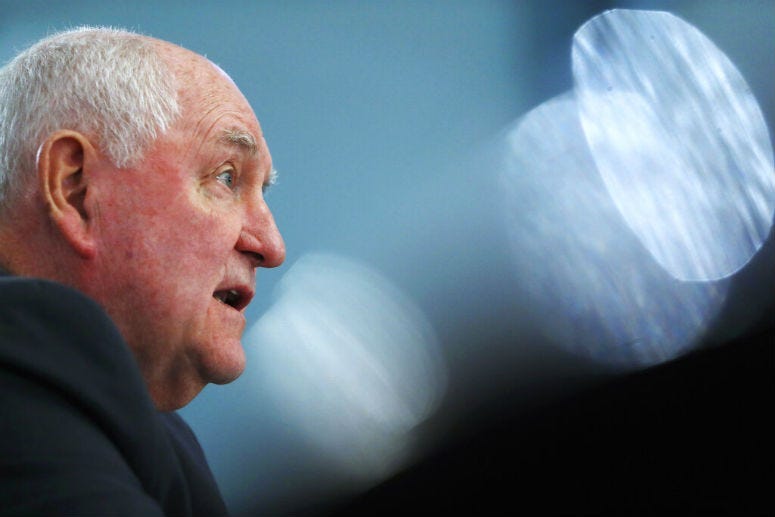 PHILADELPHIA (KYW Newsradio) — The Trump administration announced a final rule that will tighten up qualifications for who can qualify for Supplemental Nutrition Assistance Program food stamp benefits, saving the government $5.5 billion over five years and cutting benefits for roughly 688,000 SNAP recipients.

Under current law, able-bodied adults between  the ages of 18 and 49 who don't have dependents can only receive SNAP benefits for three months in a three-year period. But United States Department of Agriculture officials said counties can seek waivers to keep folks on SNAP and have done so, even where unemployment is as low as 2.5%.

"Millions of people who could work are continuing to receive SNAP benefits," USDA Secretary Sonny Purdue told reporters on a press call Wednesday.

Officials said with a national unemployment rate of 3.6%, there are now more jobs than workers to fill them. So President Donald Trump wants to encourage those who are able-bodied, without jobs and are on SNAP to get back in the workforce.

The new rule will raise the level for SNAP waivers to a 7% unemployment rate.

"We need to encourage people by giving them a helping hand, but not allowing it to become an infinitely giving hand," said Purdue.

The USDA said the rule change will not impact those with dependents, those who are disabled or those over the age of 50.

Under guidelines for SNAP, those who are able-bodied can keep their SNAP benefits as long they are in work training at least 80 hours a month or work in jobs with income low enough to qualify.

Congressional Democrats and advocates for the poor were quick to condemn the administration's actions.

Sen. Debbie Stabenow, D-Mich., said the plan will only serve to punish workers whose jobs are seasonal or unreliable.

“This administration is out of touch with families who are struggling to make ends meet by working seasonal jobs or part time jobs with unreliable hours,” said Stabenow, the top Democrat on the Senate Committee on Agriculture, Nutrition, & Forestry.

Robert Greenstein, president of the Center on Budget and Policy Priorities, said the rule would disproportionately affect minorities. He urged better job training and a higher minimum wage instead.

“Denying them basic food and nutrition is not the route that a fair and compassionate administration of either party should take,” he said in a statement.

Over the past year the Agriculture Department has proposed three significant changes to the food stamp program. In addition to restricting time limit waivers, the USDA has proposed eliminating broad-based categorical eligibility, a measure that allows recipients of certain non-cash public benefits to automatically qualify for food stamps, and changing how utility costs are factored into benefit calculations.

Brandon Lipps, deputy under secretary for the U.S. Department of Agriculture's Food Nutrition and Consumer Services, did not say when the department will finalize the other two proposed rules.

According to an Urban Institute Report, this change, along with two other proposed SNAP reforms, could result in 3.7 million fewer people on food stamps.

“Instead of combating food insecurity for millions, connecting workers to good-paying jobs or addressing income inequality, the administration is inflicting their draconian rule on millions of Americans across the nation who face the highest barriers to employment and economic stability,” Pelosi said in a statement.

James D. Weill, president of the Food Research and Action Center, said the plan is “deeply flawed and ill-conceived" and would lead to higher rates of hunger and poverty.

“The final rule would cause serious harm to individuals, communities, and the nation while doing nothing to improve the health and employment of those impacted by the rule,” he said.

SNAP isn’t the only public benefits program the Trump administration is trying to shrink.

Last year the administration announced it would allow states to impose work requirements on Medicaid recipients. Department of Housing and Urban Development Secretary Ben Carson also considered a proposal that would have tripled rents for the poorest Americans and allowed local governments to implement work requirements on those receiving housing assistance, but ultimately backed off the plan.