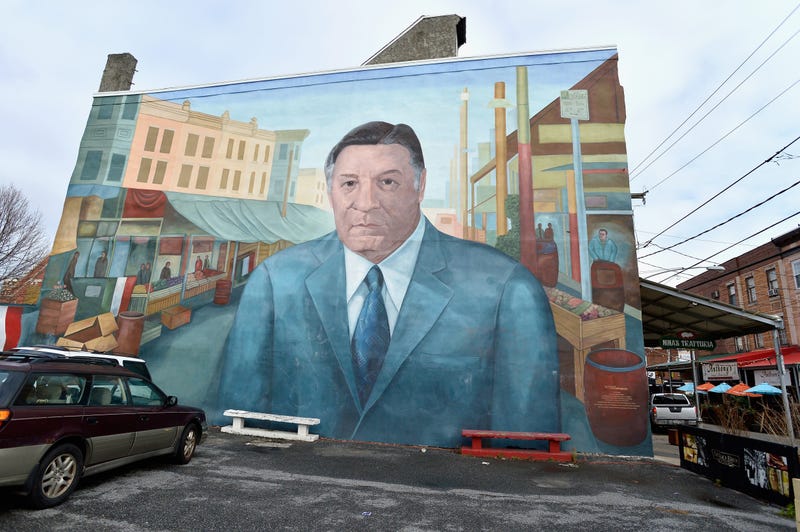 Rizzo Statue Removed From Philadelphia Municipal Building
PHILADELPHIA (KYW Newsradio) — The owners of the Frank Rizzo mural in the Italian Market say it will be replaced, following the civil unrest across the city over the death of Minneapolis black man George Floyd.
The statue of Rizzo outside the Municipal Services Building was removed in the middle of the night, passersby discovered Wednesday, after 21 years at that site.

The statue represented bigotry, hatred, and oppression for too many people, for too long. It is finally gone. pic.twitter.com/30f2Skpqog

Shortly thereafter, the South 9th Street Shopping District — joined by the owners of the building where the mural sits at Ninth and Montrose streets — said it’s time for the looming painting of Rizzo to be removed.

“Together, The S. 9th Street Shopping District, the property owners and the Mural Arts program are working to create a new mural, that better represents the fabric of S. 9th Street to replace the current Frank Rizzo mural,” wrote the district on Facebook. “We agree it is time to replace this long-standing piece of art to begin to heal the Black community, the LGBTQ community and many others.”

“The mural will be covered over with a paint coating, and then a new mural will be worked on pretty expeditiously,” said Michele Gambino, acting business manager of the South 9th Street Business Association.

In a statement, the group added that the civil unrest, looting and protests have rocked the city and forced the association to hire private security.

During Rizzo’s tenure as mayor in the ’70s, he was often criticized as being racially motivated, prompting the removal of his likeness now, amid the Black Lives Matter movement.

The Rizzo mural is often vandalized, and Mural Arts Philadelphia always cleaned it up — at a costly price.

Mural Arts announced Wednesday, after the statue was removed, that it will “cease all involvement with the mural, effective immediately,” and stop spending the thousands of dollars it took to repair it.

For several years, Mural Arts Philadelphia has engaged the community in a discussion about the fate of the mural. After careful consideration, Mural Arts has decided to cease all involvement with the mural, effective immediately.

“We do not believe the maintenance and repair of the Rizzo mural is consistent with our mission,” it tweeted. “We think it is time for the mural to be decommissioned, and would support a unifying piece of public art in its place.”