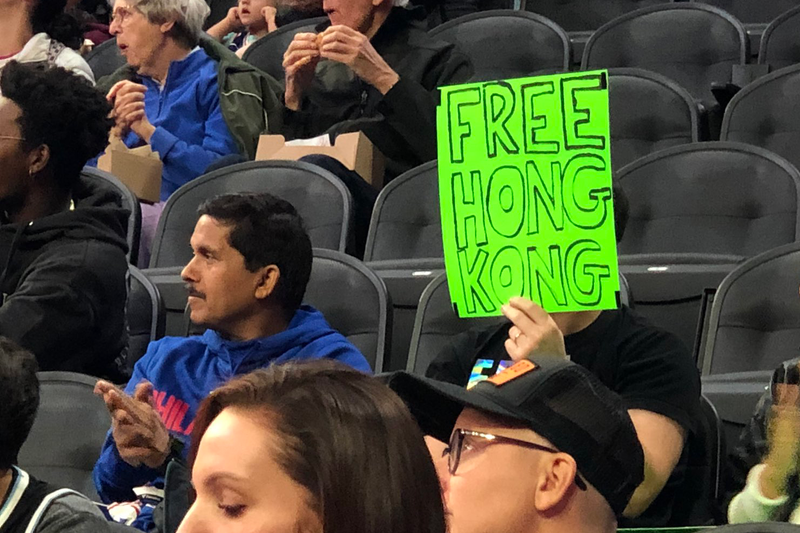 PHILADELPHIA (KYW Newsradio) — A Sixers fan says he was tossed from Tuesday night’s preseason game against a Chinese team because he held up a sign that was supportive of pro-democracy protesters in Hong Kong.

Sam Wachs says he lived in Hong Kong for a few years to teach, so he’s been following the news there, as well as the controversy now involving the NBA's relationship with China.

He says he's been very disappointed in the NBA for how it has been handling criticism of China, and in the Sixers for not addressing it head on.

"I think not saying anything is saying something," Wachs said on Wednesday.

He says he bought tickets to the game specifically to make a statement. As the Sixers hosted the Guangzhou Loong Lions on Tuesday night, Wachs and his wife held up fluorescent green signs reading "Free Hong Kong," which was also on his shirt, and "Free HK." They also wore masks to cover their mouths.

"We were sitting in our seats silently holding the signs, and about five minutes into the game, a security officer came up and said, 'We can't be showing the signs. No politics,'" he said.

He said the guard took one sign, then came back and took the other. Then, when Wachs got up and chanted, "Free Hong Kong" he says that was it.

"Pretty quickly, escorted out of the game by security," he said.

Here are the controversial signs. I know, earth shattering right? Obvious why the NBA would have a problem with this. Thanks to @Christie_Ileto for sending me this photo: pic.twitter.com/Y1GydtGked

A Wells Fargo Center/Comcast-Spectacor spokesman said in a statement: "During the second quarter of last night’s 76ers game, Wells Fargo Center security responded to a situation that was disrupting the live event experience for our guests. After three separate warnings, the two individuals were escorted out of the arena without incident. The security team employed respectful and standard operating procedures."

The Center's policy on its website says: "Signs must be in good taste and appropriate for the event."

The Sixers have not commented on the incident.

This happens as Chinese officials and businesses are giving the NBA a hard time after Houston Rockets General Manager Daryl Morey tweeted in support of the protesters in Hong Kong and the league tweeted an apology to "our friends and fans in China."

Lawmakers from both sides have been critical of the response, saying the NBA has been soft on China to preserve profits coming from there.