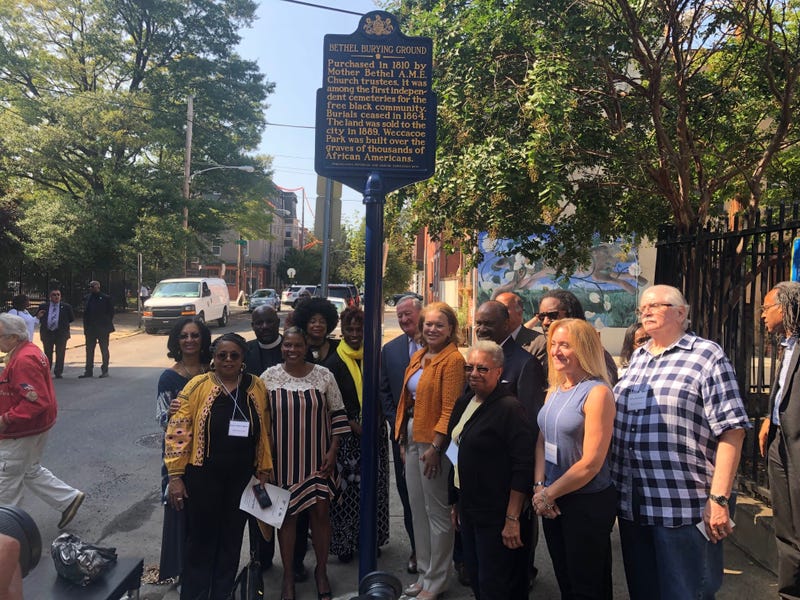 PHILADELPHIA (KYW Newsradio) — The Weccacoe Playground in Society Hill now has a historic marker recognizing the centuries old African American burying ground that sits underneath. The marker is one of many milestones to come.
Its unveiling near 4th and Queen Streets was a celebration.

At unveiling of historical marker at #WeccacoePlayground - the site of the old #BethelBuryingGround where the bones of thousands of African Americans still remain. More on @KYWNewsradio #history #blackhistory @MotherBethel pic.twitter.com/WxlFuZFAk2

It's been more than six years since historians stumbled upon thousands of bones beneath the Weccacoe Playground. The land had been purchased by Mother Bethel AME Church in 1810. It was used as a burying ground for freed African Americans for decades. The church founder, Richard Allen, sold the property to the city in 1889 for $10,000. The church used the money to build its current home at 6th and Lombard Streets.

"While we sold the land, we didn't sell the bodies that were in the ground," says Mark Tyler, pastor of Mother Bethel AME Church.  "It's estimated at five thousand people who are buried here. At a certain point they started burying people on top of one another."

Tyler and the church are part of a coalition of groups pushing to get a memorial established at the playground, which is set to undergo a $1.15 million dollar renovation.

When KYW Newsradio asked if the bones will remain in place, Lee responded, "They will not be disturbed, and that's what makes it a really interesting project."

She says the city will soon put out a call to artists. In the spring they'll review design ideas and make a decision on the memorial design by the summer. But the artist will have strict perimeters to preserve the bones.

"They can't put anything deep into the ground because there isn't a lot of space between the surface of the ground and where the bodies are buried," she says, "There may be a weight limit. So it's an important project, it's going to be a very interesting project, and a very challenging project."

Lee says the city will incorporate community feedback throughout the process. A groundbreaking will take place next fall,  with completed renovations expected a year later.