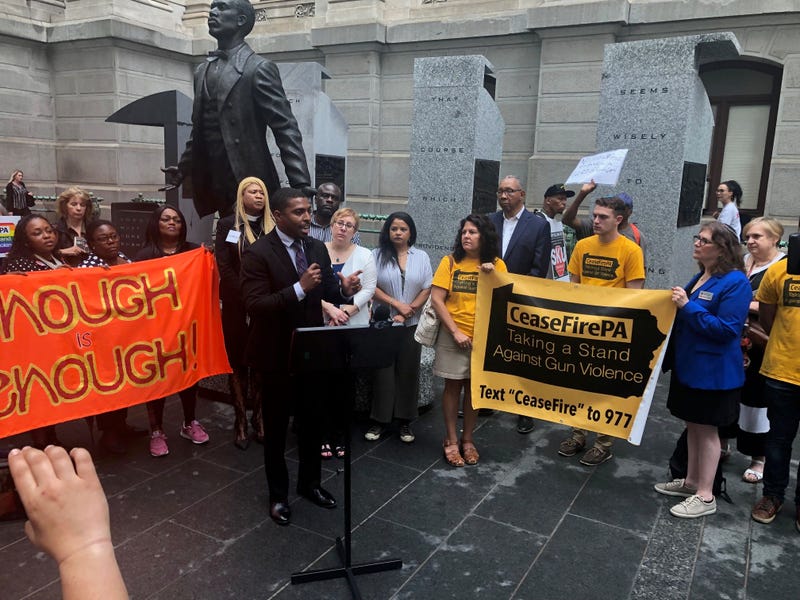 PHILADELPHIA (KYW Newsradio) — Community groups came together to rally against the recent rash of gun violence in the Philadelphia, putting the focus on the victims.

It's been less than a week since six people died and 28 were injured in a rash of shootings over the span of just two days.

"We are in a state of emergency," said Rosalind Pichardo, who joined about three dozen protesters outside City Hall Thursday.

Pichardo's boyfriend was murdered in 1994; her sister took her own life with a gun in 2000; her brother was gunned down in 2012; even she was a target of an attempted murder.

"I am tired of going to a mother's house and sitting on the couches with them," she said. "I am so tired and hurt that these people cannot resolve problems without picking up firearms. It's time for people to speak up and not be afraid of pointing out who the shooters are."

The rally was organized by CeaseFirePA, POWER and other victim advocacy groups in an effort to target gun legislation like Senate Bill 531, which would make it tougher for cities like Philadelphia to enact their own gun laws.

"It's really going over the top now," said Anton Moore, founder of Unity in the Community, a group that takes on gun violence. "You are seeing so many shootings and so many killings. It's really becoming a problem now."

Outside of Philadelphia #CityHall where a group gathered to rally against recent gun violence. They want a crack down on guns, but also aid for youth in high crime areas. More on @KYWNewsradio today. @antonmoore1 @CeaseFirePA @powerinterfaith pic.twitter.com/tXTcJXUvHg

Moore has been effective in stopping the sale of real-looking toy guns in corner stores. His group also supports victims impacted by gun violence.

He said the approach to stopping the "summer hit" — the annual uptick in gun deaths in Philadelphia — must be multi-pronged for the youth.

"We can say 'put the guns down,' but we have to bring City Hall to those neighborhoods," he said. "These young people need opportunities."

"We are more vigorous about bringing gun cases than the prior administration," noted Philadelphia District Attorney Larry Krasner, who attended the rally in solidarity with protesters, though he has been criticized in recent weeks for not being tough enough on crime. "We do reject the narrative that simply being punitive and retributive works. We can see that now that it doesn't work."