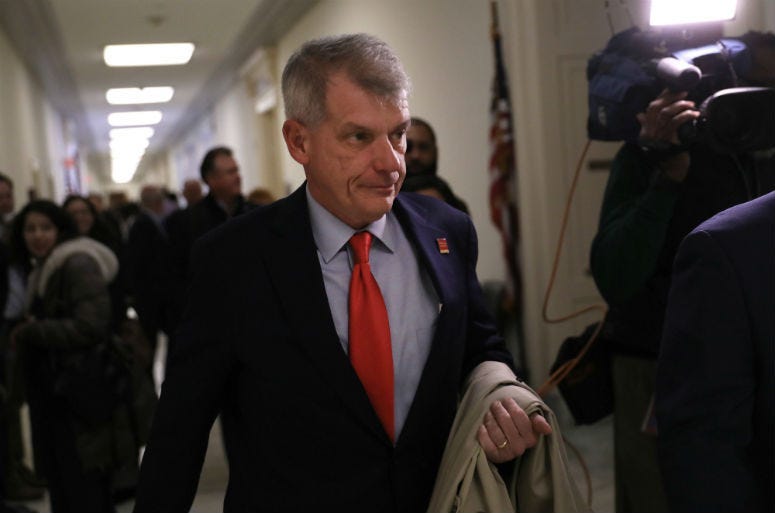 Sloan's compensation, a nearly 5% increase compared to 2017, was disclosed Wednesday in a regulatory filing.

Sloan made less than his main peers. JPMorgan CEO Jamie Dimon received a $31 million pay package for 2018, while Bank of America CEO Brian Moynihan received compensation of nearly $23 million, according to regulatory filings.

Most of Sloan's increase, meanwhile, came from a bonus — his first as CEO.

The company's latest proxy filing also laid out a new forfeiture provision that is tied to 2019 compensation, and whether Wells Fargo's regulatory issues are resolved.

The document was filed one day after the CEO testified before Congress and said the bank is still working to right past wrongs.

On Tuesday, Sloan tried to convince lawmakers that Wells Fargo has abandoned the aggressive sales tactics that led to the creation of millions of fake accounts and other issues, such as charging thousands of customersfor auto insurance they didn't need and imposing unwarranted mortgage fees on homeowners.

"Our corporate culture has substantially improved," he told the House Financial Services Committee.

Sloan has spent the past two years as CEO trying to clean up the bank.

But in early 2018, the Federal Reserve put Wells Fargo in the penalty box, instituting an unprecedented asset cap for "widespread consumer abuse." The cap, which keeps the bank from growing, remains in place.

Sloan on Tuesday outlined leadership shakeups at the company and new measures aimed at curtailing risk, while conceding that Wells Fargo has more work to do.

"Doing right does not stop with simply repairing harm and rebuilding trust," he said.

But lawmakers from both parties were critical of Sloan.

Chairman Maxine Waters, a Democrat, said he hasn't been able to keep Wells Fargo out of trouble. She asked if the bank should be "downsized" and said regulators should consider replacing him.

Ranking member Patrick McHenry, a Republican, also displayed frustration. He asked Sloan if the scandals were over, or if more negative headlines would surface.

"I can't control the media," Sloan said. "There's nothing else that I'm aware of that we haven't disclosed."

Wells Fargo stock fell 24% in 2018. By comparison, the entire S&P 500 fell 6% over the same period, but it was a terrible year for financial services companies.