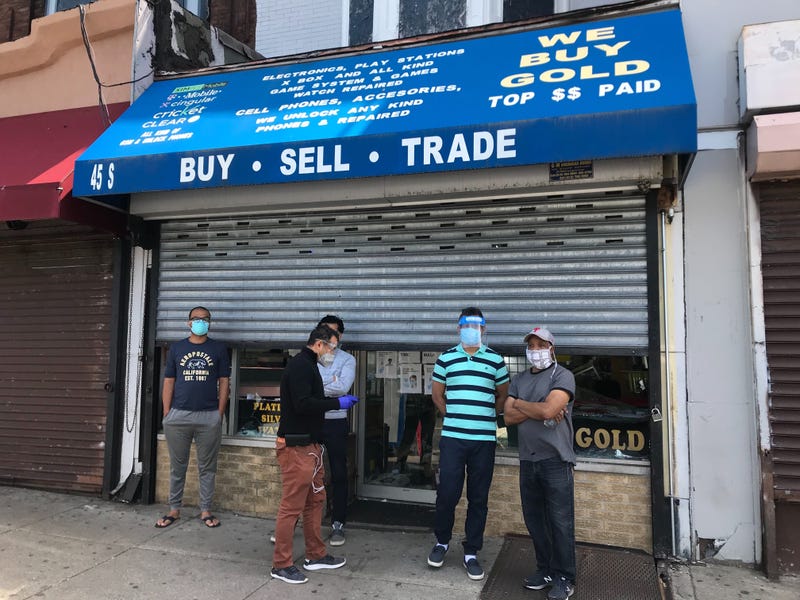 And by 4 p.m. that day, mayhem with hundreds of people gathered near 52nd and Chestnut streets, stealing shoes and apparel from — guess where — Footlocker. A nearby McDonald’s was also vandalized.

“All you gotta do is search Instagram and you will see the kids talking about what they are doing,” said Akayla Brown, 17. “They are talking to each other on social media. Some people are even posting about the stuff they steal."

Brown says social media comments and posts, as well as chats among friends, reveal the outrage among youth over the death of Black people by police. She says it’s festered for a long time.

In west philly where a McDonalds has been vandalized, fire is burning and nearby folks are looting. Police are here- just watching and waiting. @KYWNewsradio #riots #GeorgeFloyd #phillyriots pic.twitter.com/EYbhwiIUhq

“I was waiting to see what was that trigger that would begin the rioting and the looting,” she said. "People are angry. People are really, really angry."

“No Black-owned businesses got touched,” he says.

Pleas to looters by business owners - as fire fighters work to quell a blaze near 60th and chestnut. Hoping that by identifying as #Blackowned they’ll be saved. This night has been hard on #WestPhilly. @KYWNewsradio #riots #GeorgeFloyd #chaos pic.twitter.com/hm4QGPU1ad

For the most part, it helped. Although, some businesses close to the targeted stores did suffer damage.

Those who didn’t mark their businesses as Black-owned suffered pain similar to the stores targeted in neighborhoods, including pharmacies like Rite Aid; electronics, beauty supply, shoe and apparel stores; dollar stores; big box stores and chains; grocery stores; and other businesses viewed as owned by larger corporations.

“They was working as a team,” said Christine, who lives on 52nd Street. She too declined to give her last name, but she says when looters showed up Sunday night to break into her home, she confronted them and they politely redirected their crimes to the business next door.

"They said, 'I’m sorry. I apologize,'" she said. "They just wanted to get what they wanted, to get and go."

She said it looked like there were working together.

When they left Christine’s home, the looters broke into the check-cashing and convenience store next door. The store owner declined to be recorded, but he said looters broke into his ATM and stole $6,000. He says they also cleaned out his cash register, trashed the place and took hookah items and other products.

“Looters came like 2:30 in the morning, and they took almost everything,” said Masum Siddique, who has owned MN Wireless on 52nd Street for 20 years.

“I watched it all on camera while I was at home.”

Siddique says 100 looters busted his window and used a van to steal cell phones and electronics.

Still processing some of what I saw today- in the aftermath of looting from this weekend. My story on @KYWNewsradio’s am drive will explain why many business owners believe the looting was a pre-planned, organized endeavor. #riots #protests #GeorgeFloyd #westphilly pic.twitter.com/OfK4UcQc8W

“I don’t know how I’m going to run my business again,” he said. "This is a very tragic situation.”

He’s not sure if he’ll re-open.

Many say the young looters are not alone. Witnesses say they’ve gotten help from white individuals from outside of the neighborhood.

“I saw a white male, with a beige shirt and dark pants, place a incendiary device in front of the Family Bargain story on 52nd and Sansom streets," said Pamela Williams, a pastor. “Later I discovered the store had a blaze. And I saw it with my own eyes.”

Williams says she reported the incident to police.

“He was an agitator who was there to incite a riot,” she said. "He was not part of the individuals who were there protesting. And I saw what he did with my own eyes. And I am mad as hell.”

When Brown heard about the looting of the stores, and how it happened, she said, “I’m not surprised.”

She said she believes the looting and mayhem by young people will continue. They want their voices heard and won’t stop until someone listens.