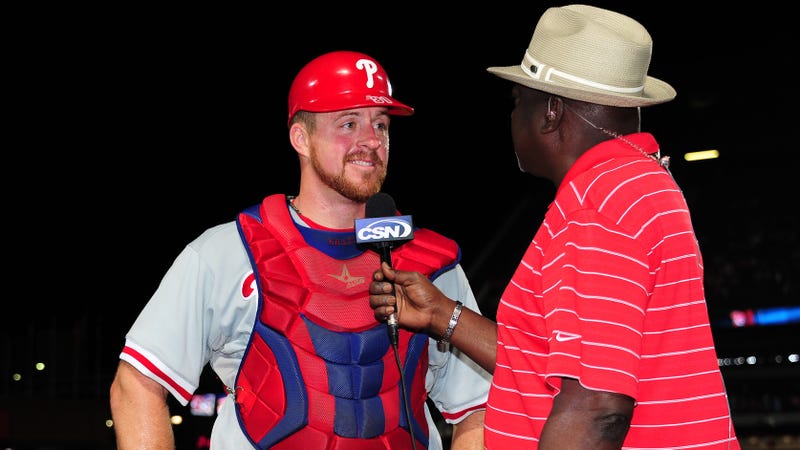 Erik Kratz of the Philadelphia Phillies is interviewed by Gary Matthews after the game against the Atlanta Braves at Turner Field on August 31, 2012 in Atlanta, Georgia. Photo credit Scott Cunningham/Getty Images
By Matt Leon, Jay Sorgi, and KYW Podcasts, KYW Newsradio

PHILADELPHIA (KYW Newsradio) — Erik Kratz grew up by the Bucks-Montgomery County line, attended Dock Mennonite Academy in Lansdale, and played with the Philadelphia Phillies for four years during his 9-team career as a major league catcher.

Now, Kratz’s voice will go over the airwaves, smart speakers and mobile devices of the Delaware Valley that he still calls home, as one of the Phillies’ recently-hired radio color commentators for 20 road game broadcasts on 94WIP.

Listen to Erik Kratz's interview during 1-on-1 with Matt Leon below.

“When I played for the Phillies, a couple of people on the broadcast team had mentioned to me that maybe I'd be pretty good at it. And I was like, ‘Okay, like, thanks,” Kratz told KYW Newsradio’s 1-on-1 with Matt Leon podcast.

“Different teams I played on, different people would say the same thing. Like, ‘You're probably pretty good at this.’ And for me, pursuing it now is something that's only going to work if I can just be who I am, making mistakes and enjoying baseball, talking baseball.”

Kratz said his new assignment is more than just dipping his toes in the pool, but sitting on the edge of the pool with both legs in the water.

“I’m enjoying the water, and I’m not fully in yet,” he said. “Definitely something that’s exciting for me to try it out.” 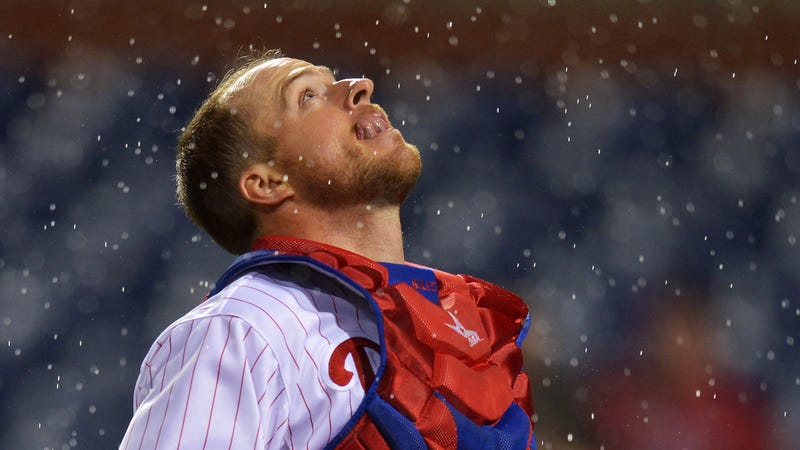 Kratz, 41, will be participating in his 20th year connected to professional baseball, after first discovering through high school baseball in Lansdale that his role in the game was meant to be behind the plate.

“Everybody wants to be a shortstop,” Kratz admitted. 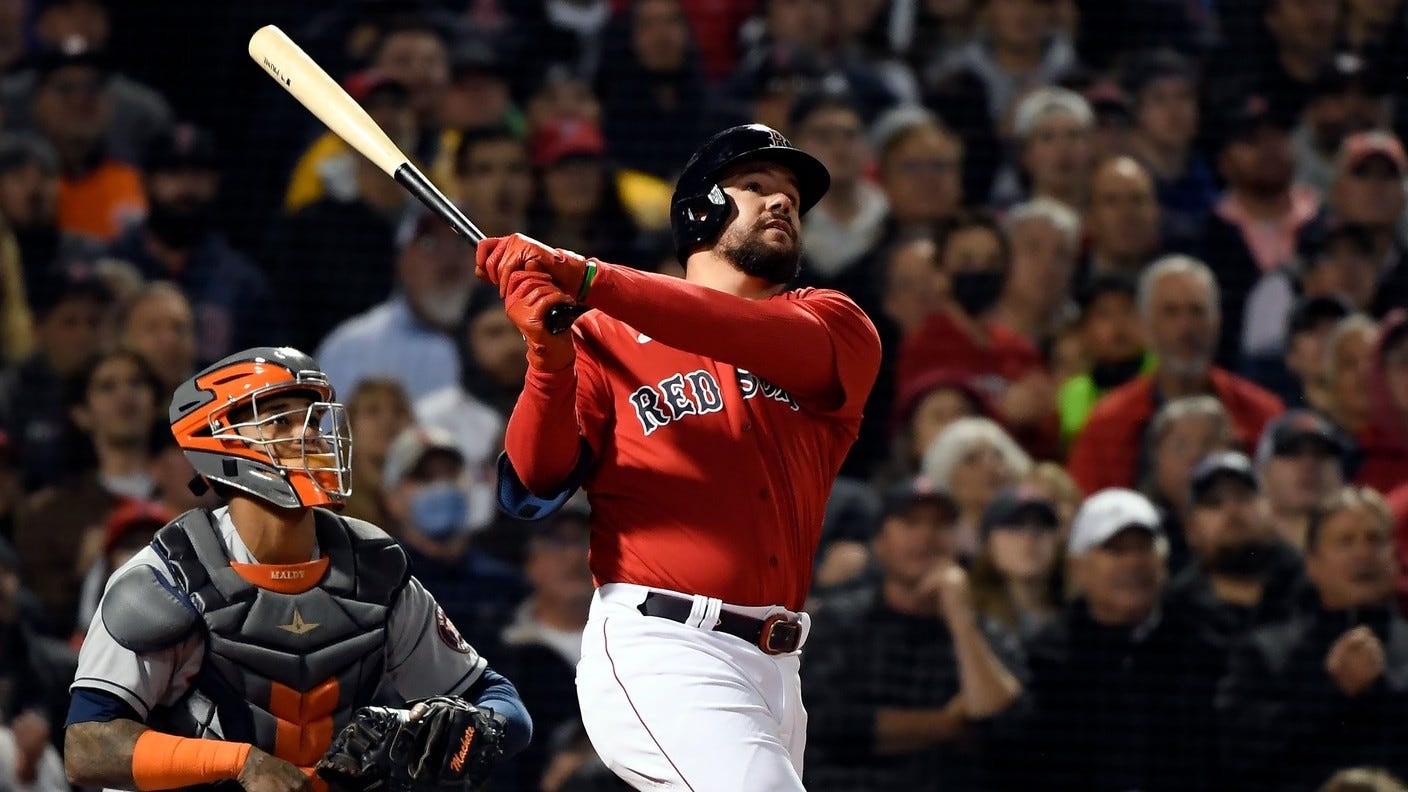 ”I found out that it takes a lot more to be a shortstop, and I found that out in probably my sophomore year of high school when there were other shortstops at my school that were better.”

It took Kratz until his 30s before he finally broke through to the majors with the Pittsburgh Pirates organization. His major league debut stood out on the stat sheet as well as in his memory, on July 17, 2010 in Houston against the Astros. 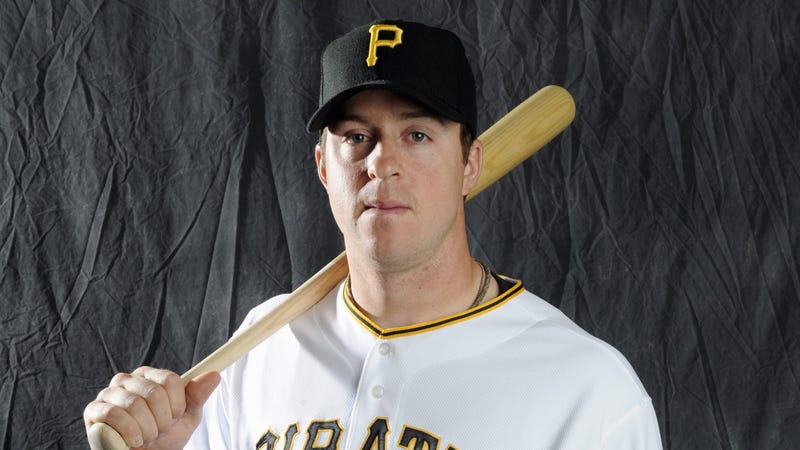 “We won. I got two hits, I got an RBI that game,” he said, remembering that his first hit was a broken-bat single to right-centerfield against Houston pitcher Bud Norris.

“Fortunately the night before, I didn’t play. I got to soak in everything, and it was one of those things that I got to feel my emotions. I had a lot of time before that to think, ‘If I ever get called up, what am I going to be feeling? Am I going to soak everything in?’ Being an older guy, being a father, you’re in a different mindset.”

For Kratz, that mindset was born of the humility stemming from nine years in the minor leagues.

“The resounding thing that I kept thinking of was all of my teammates that at different points in my career were better than me, and what an amazing opportunity,” Kratz said.

A year later, after a short stint with Pittsburgh, Kratz found his way to the team he grew up watching, playing home games at Citizens Bank Park, a one-hour drive from his Telford hometown. 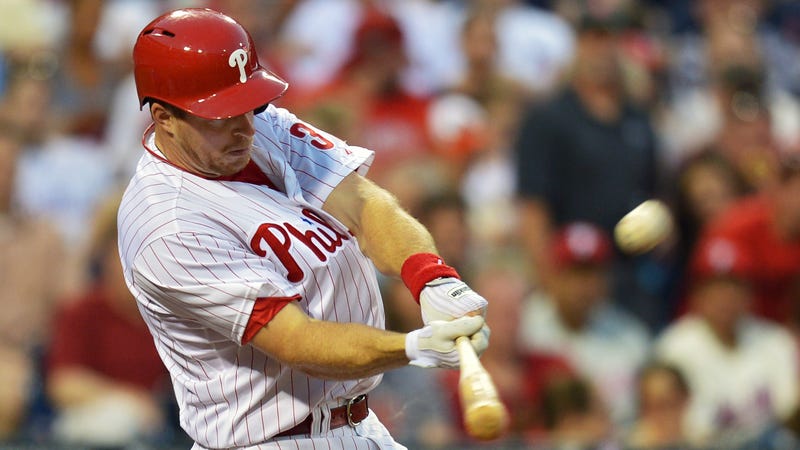 Erik Kratz of the Philadelphia Phillies hits a home run in the fourth inning during the game against the Boston Red Sox at Citizens Bank Park on May 29, 2013 in Philadelphia, Pennsylvania. Photo credit Drew Hallowell/Getty Images

“We were living in Virginia at the time,” Kratz said. “She knew I grew up a Phillies fan…I'd be in Philly, I'd be close to my parents, she would have helped with the kids. And she's like, ‘You’ve got to take it.’”

“It was the best decision that I could make for my career,” he added, saying there were “so many other cool things about it, that I got to play for the team I grew up rooting for.”

Kratz played with the Phillies from 2011-13 and again in 2015. More than anything in his professional career, he said the greatest takeaway was the experience playing near his hometown for fans who were much like him. 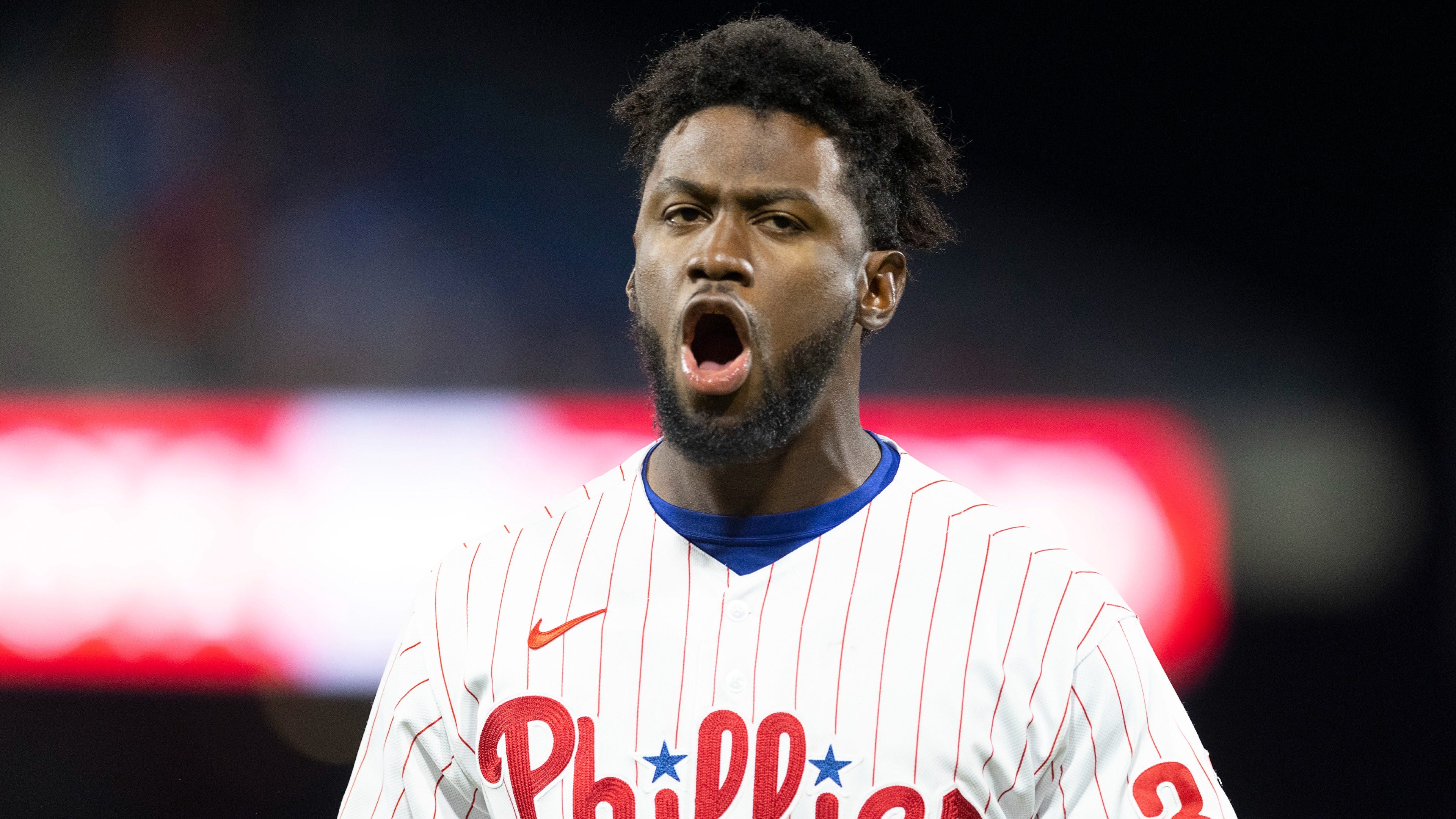 Phillies have reportedly reached an agreement with Odubel Herrera

“The whole interaction with the fans. I think it just came naturally in the sense that I was a Phillies fan when I grew up,” said Kratz.

“Nobody boos louder than Philly fans. Nobody cheers louder, either. That spectrum is there. And to me, that's energizing as a player.”

Now, Kratz gets to use his voice to share his expertise and love of the game on the radio with those same Philly fans who loudly booed and cheered for him. And he gets to do it just a short distance from where he grew up and learned the game that has defined his life.

Listen to the full 1-on-1 with Matt Leon interview with Erik Kratz below.