PHILADELPHIA (KYW Newsradio) — Philadelphia police and fire units showed off what they do with stunts and demonstrations. It was part of the 67th annual Hero Thrill Show at Wells Fargo Center, and it was all for a good cause.

The Hero Thrill Show began as a way to raise college money for the children of injured and fallen firefighters and police officers, according to the show's president and CEO James Binns. "It started in 1954, when eight firefighters got killed in the line of duty," he said.

Over the years, Binns said, the show has raised millions of dollars in support of the families of their fallen colleagues.

But attendance started to wane in the 1980s and '90s. In 2006, in an effort to revive the event, then-Police Commissioner Sylvester Johnson asked Binns to take it over. 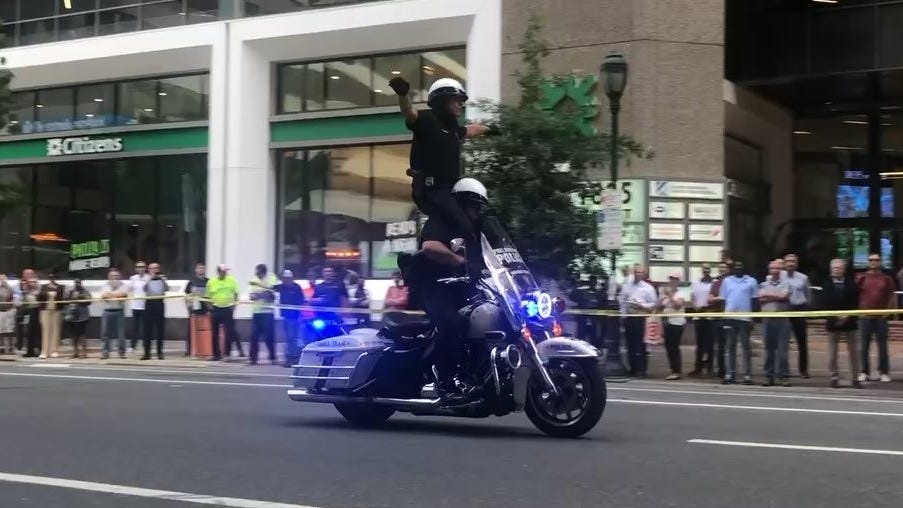 "That year coincided with the filming of the movie Rocky Balboa. I played the boxing commissioner in the movie," he recalled.

"So I made a deal with [Sylvester] Stallone that I would get a statue at the Art Museum if he will be the grand marshal of this. He agreed. So the attendance went from 50 people to 13,000."

Philadelphia Police Commissioner Danielle Outlaw said those in attendance not only get a thrill show of motorcycles, canines and police car chases, they can also climb on the equipment and talk with the officers and firefighters.

"It's a great day to be part of something positive and uplifting and then also just for the general public to see what it is that we do," she shared.

"A lot of families will tell you that without the efforts or the support from the Hero Thrill Show, it would be a very difficult time for them."

While the event has been around for 67 years, this was Annamarie Gindele's first time attending. "Everything's amazing, between the firefighters, the canines, the helicopters," she said.

"There's definitely a lot of things that go on in this city that a lot of people know are heartbreaking and everybody's just here for one reason, and it's to show support."