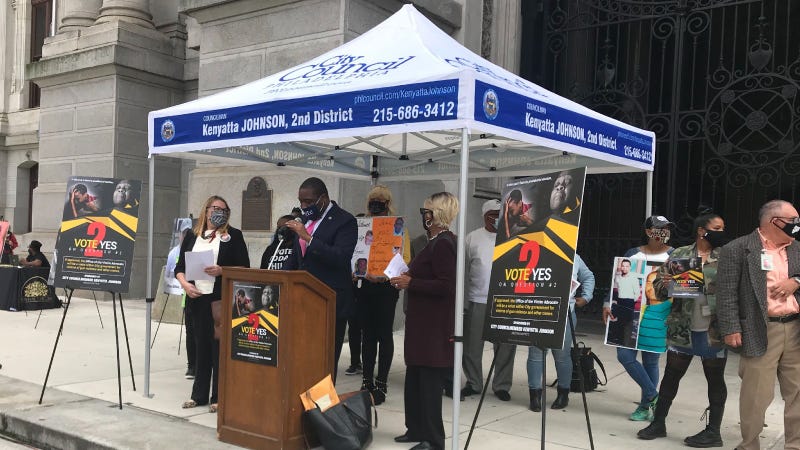 PHILADELPHIA (KYW Newsradio) — One of the questions on the ballot in Philadelphia would create a local Office of the Victim Advocate to provide a voice in City Hall for crime victims. It would be separate from a similar office over the entire state, but not everyone is on board with the idea.

As of Monday, 386 people have fallen victim to homicide in Philadelphia — a 39% increase over this time last year, and the impact is felt deeply by survivors.

“When that mother or that father loses a loved one, they should have the support that they need,” said Councilmember Kenyatta Johnson.

He is chair of the Special Committee on Gun Violence and is also a gun violence victim — his cousin was murdered in 1998.

“We are about to pass more than 400 murders. That’s 400 families that need to have their voices heard here in the city of Philadelphia,” he said.

Ballot Question No. 2 asks whether voters would like to change the city charter to create an Office of the Victim Advocate.

Johnson said the office would agitate, advocate, support and collaborate on behalf of those who have lost family members to gun violence, especially when the issue of police reform and justice reform are on the table.

“Sometimes the system works and sometimes it presents stumbling blocks for healing,” said Aleida Garcia, co-chair of a subcommittee of the Special Committee on Gun Violence.

She is a proponent of OVA and runs the National Homicide Justice Alliance. Her son, Alejandro Rojas Garcia, was murdered in 2015.

She stood on stage alongside Dr. Dorothy Johnson-Speight, founder of Mothers In Charge, whose son Khaaliq Jabbar Johnson was murdered in 2001 over a parking space.

“Sure, there’s an office in the state, but it’s in Harrisburg, and Pennsylvania is a large state and we need something here in Philadelphia,” Johnson-Speight said. “We need the support no matter how long it’s been.”

A number of mothers, fathers and others spoke about the pain of losing a loved one to gun violence

Earlier today- @councilmankj held a press conference on #BallotQuestion2- to create a philly #officeofvictimadvocate to be a voice for victims city hall on #justicereform, etc. Lots of survivors and others on board. But not everyone agrees. More on @KYWNewsradio pic.twitter.com/c7bMr4CUsL

But A’Brianna Morgan of Reclaim Philadelphia, a grassroots group calling for Philadelphia Police Department to be defunded, has advised progressive voters to vote “no” on Ballot Question 2.

“I have a number of reservations for a government-run service,” Morgan explained. “This is primarily based on what we’ve witnessed at the state level: the Pennsylvania Office of the Victim Advocate has failed to deliver policies that help Black and Brown communities heal from the trauma of gun violence, incarceration, and poverty.”

Instead, Reclaim argues that such offices push for harsher penalties and longer sentences, rolling back progress on criminal justice reform.

“Providing care, support, and long-term healing services to those who have experienced harm is fundamental for our communities, and we have grave reservations about a government-run service being given that role without extremely careful planning and oversight by the communities most impacted,” said Morgan, who is a sexual assault and gun violence survivor. She said her brother was murdered.

“This recommendation was not made lightly,” she added.

It’s unclear how adding an Office of the Victim Advocate would impact their work or whether it would be duplicative. Johnson said the Philadelphia OVA would provide referrals to other groups.

“We will collaborate, coordinate and partner with those other organizations,” explained Johnson.

It’s also unclear how much this would cost.

“If we can come up with a budget for bike lanes, we can find the money to support families who lost their loved ones to gun violence,” he said.

“Murder and gun violence are expensive,” said Garcia, “there is no way to save money on gun violence.”

Johnson said the office will not work to reverse progress on mass incarceration.

“This is about the victims having a voice,” he told the crowd that gathered at City Hall Monday.

Other questions on the ballot relate to the creation of a Citizen Police Oversight Commission and the elimination of stop and frisk.