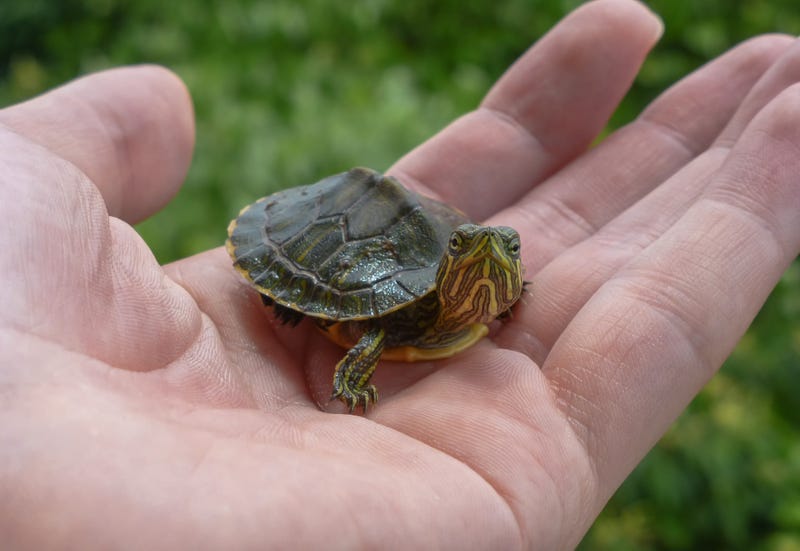 A baby turtle sits in the palm of someone's hand. Multiple cases of salmonella have been linked to the sale of small turtles by street vendors. Photo credit Pablo Solís Fernández/Getty Images
By John McDevitt, KYW Newsradio

PHILADELPHIA (KYW Newsradio) — Health officials in multiple states are investigating cases of salmonella linked to pet turtles purchased from vendors on the street. There are eight cases in Philadelphia and Delaware County, with one person dead as a result.

You may have seen them on the streets, like in South Philadelphia. They're turtle vendors, some with coolers to keep the little creatures out of sight.

It's not only illegal to buy and sell turtles under four inches in length here, but it also could be deadly because of the potential of salmonella.

"Most people will recover on their own but it can be a very serious infection, so this is not something that I would suggest people take lightly," said Health Commissioner Dr. Thomas Farley.

Even though all turtles can pose a potential salmonella threat, Karen Verderame, the animal programs developer at the Academy of Natural Sciences of Drexel University, said the turtles sold on the streets are typically not cared for as best they should.

"A lot of these turtles in the black market are kept in large numbers," she said," and they are not necessarily kept in the cleanest conditions, which can also really cause salmonella to run rapid in those populations."

The Philadelphia Department of Public Health recommends anyone who came into contact with a turtle and became ill to call their health care provider.