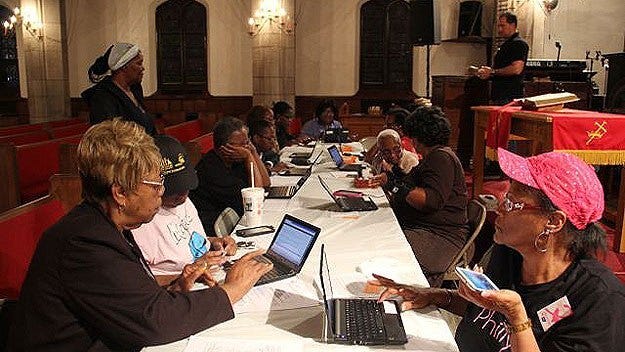 A group of volunteers make calls in a Philadelphia church to voters ahead of the 2016 election. This year, get-out-the-vote efforts are at an all-time high. Photo credit Cherri Gregg/KYW Newsradio
By Cherri Gregg, KYW Newsradio 1060

PHILADELPHIA (KYW Newsradio) — Get-out-the-vote efforts in Pennsylvania are at an all-time high — with some voters receiving up to a dozen messages every day.

“I get text messages daily. I get phone calls from various people,” said Angelita Byrd, a Philadelphia voter who has seen an uptick in voter outreach over the past two weeks.

“The most shocking was opening my door and seeing a gentleman walking up my stairs,” she said. “He simply said, ‘Angelita?’ and it kind of freaked me out. I wasn’t mad, it just gets a little annoying.”

Byrd plans to vote in person on Nov. 3, and like many Pennsylvanians, she doesn’t need much convincing.

More than 9 million Pennsylvanians are registered to vote — a new record in the commonwealth.

“I may call 100 people and only get one or two pickups,” said Gilda Johnson, who’s volunteering to reach out to Pennsylvania voters on behalf of several organizations.

In her previous outreach efforts, Johnson said they could access voters at rallies or other in-person events. COVID-19, however, has forced get-out-the-vote efforts to be socially distanced, so volunteers focus on mail, email, texts and calls.

“People are so nervous about this election,” she said. “That’s (why) I think there’s more of it.”

“This has got to be the most outreach I have ever seen in my entire voting life,” noted Baba Taiye Renfrow, a voter from Montgomery County.

He and his wife get daily texts, calls and mailings from Democrats, Republicans and other groups, and that number increases by the day.

Annoyances aside, he thinks it’s a good thing.

“If we had seen this type outreach four years ago, we may have had a different outcome,” said Renfrow.

Republicans have closed the gap on voter registration in central Pennsylvania, partly by hosting numerous events throughout the state.

Celebrity supporters from both parties have made Pennsylvania a frequent destination. On Friday, hip-hop artist and actor Common performed at Philadelphia City Hall for voters who were standing in line to vote early.

“We started after the election of Trump, and a lot of people were upset and wanted something to do,” explained Jaime Perrapato, executive director of Turn PA Blue.

The group launched an effort in 2018 to flip the Republican-led state Legislature by going after counties that voted blue for the president but red for local races. Perrapato said they found success.

“We were able to help flip 14 seats in the southeast (of the state House) and we netted 11 seats,” she said, noting they lost three seats in other parts of Pennsylvania.

During this election cycle, the focus is on gaining nine House seats and four state Senate seats, while retaining the seats that are already in Democratic hands. Turn PA Blue is making thousands of calls daily.

“Our focus is on voter education of the mail-in ballot because people are so anxious and are very eager to vote,” Perrapato said.

But voters are also being inundated with disinformation. Many voters have reported receiving text messages or videos from someone who purports to be a Democratic volunteer with a group called APP PAC. The message includes a conspiracy theory that claims Joe Biden is pushing for sex changes among young children. 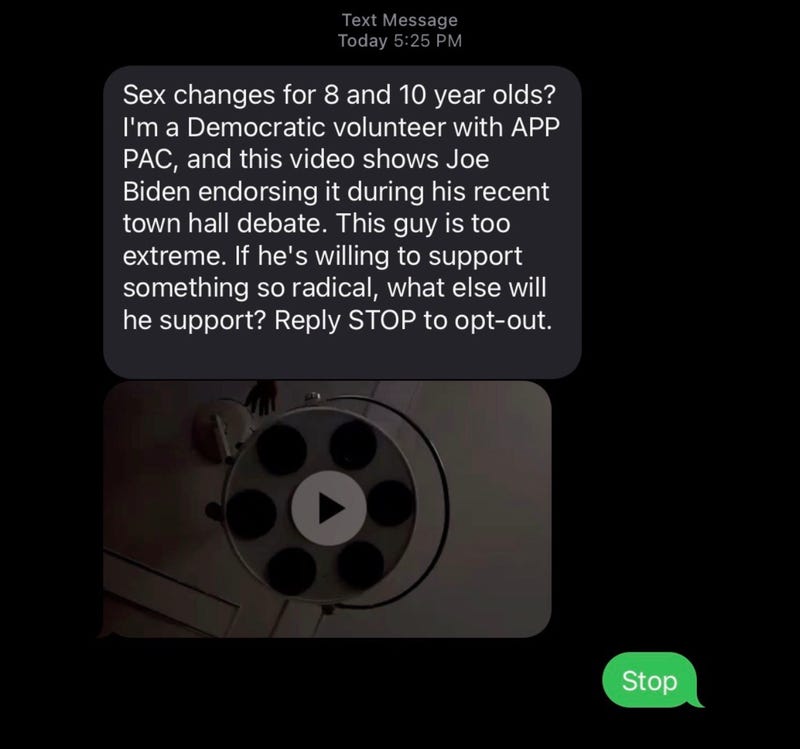 “It’s insane,” exclaimed Kareem Thomas, a Montgomery County voter who received the video in a text. “It made me angry because … we know it’s not true.”

Several of his Black friends who are registered voters also received the text, and he believes they were targeted. Thomas, who has worked with the Urban Affairs Coalition in Philadelphia, fears less-educated voters could fall victim to the propaganda and choose not vote.

“If you’re a first-time voter, if you haven’t been paying attention or you’re on the fence, you may fall for this,” he added.

The deadline for early in-person voting or to request a mail-in ballot is Oct. 27. Election Day is next week. Information on drop-box and polling locations is available at votespa.com.