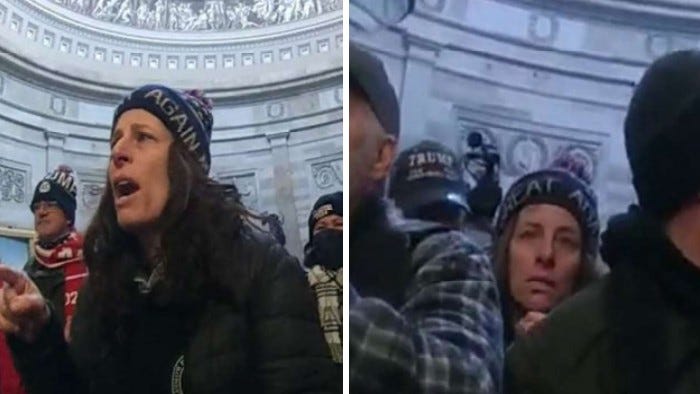 PHILADELPHIA (KYW Newsradio) — People familiar with legal techniques that are grounded in reality might be forgiven for not recognizing the defense strategy of a western Pennsylvania woman who was arrested in May in connection with the U.S. Capitol insurrection on Jan. 6.

Pauline Bauer of McKean County, Pa., who allegedly called for U.S. House Speaker Nancy Pelosi and other lawmakers to be dragged from the House chamber and hanged, has told a federal court that she is endowed by God with immunity from prosecution.

"I am here by special divine appearance, a living soul," she told a judge during a hearing in June, according to a Daily Beast report. "I do not stand under the law. ... Under Genesis 1, God gave man dominion over the law."

She was removed from the hearing and, at a later hearing, held in contempt of court, landing her a night in jail, according to court records cited in various reports. Bauer's strategy appears to be based on the beliefs of the Sovereign Citizens Movement. Typical adherents claim to exist independent of U.S. law. The fringe movement has racist and anti-Semitic roots, according to the Southern Poverty Law Center, which describes it thus:

“Sovereign citizens believe that they — not judges, juries, law enforcement or elected officials — should decide which laws to obey and which to ignore. Most sovereign citizens also don’t believe they should have to pay taxes. They clog up the courts with indecipherable filings and, when cornered, many of them lash out, retaliating through acts of paper terrorism and, in the most extreme cases, acts of deadly violence — usually directed against government officials.”

According to various reports, after being released from jail, Bauer filed several documents with the court that have no basis in U.S. law, and which she incorrectly believes free her from government control.

These include a "Patent of Nativity" — a family tree tracing her Virginia and Pennsylvania ancestors back to a time before the founding of the country, which she claims "serves as Proof that my living DNA existed on this Land before there was a UNITED STATES of America or Any STATE Thereof."

With another filing (see below), a "notice of special divine appearance, status, standing, dominion," Bauer submits 11 pages of gibberish in which she rejects any reference to herself as a "person" and rebuts the court documents in her case file.

She is one of 42 Pennsylvanians arrested after the violent and deadly disruption of the certification of the 2020 presidential election. She faces charges of obstructing justice and Congress, knowingly entering a restricted building, knowingly engaging in disorderly conduct in a restricted building, and violent entry and disorderly conduct on Capitol grounds.

The FBI has amassed a collection of videos, photographs and screen grabs from various sources and witnesses allegedly showing Bauer inside the Capitol building and bragging about her involvement in the attack.

Bauer can be seen shouting in the Capitol Rotunda in a video from a D.C. Metropolitan Police Department officer's body camera. ‘Bring her out’: 2 Pennsylvanians charged in latest round of Capitol arrests

"Bring them out. We want them out here. ... You bring them out or we're coming in. ... They're criminals. They need to hang. Bring her out. Bring Nancy Pelosi out here now. We want to hang that f---ing bitch. ... What are you trying to protect? A f---ing Nazi? Is that what you're protecting?" she said, according to an affidavit submitted by an FBI special agent involved in the investigation.

According to FBI documents, five witnesses sent tips alleging Bauer's involvement in the attack. One of them testified that Bauer, who owns Bob's Trading Post, a pizzeria in Kane, Pa., with her husband, "became more and more political over the past year, and began losing business because people were uncomfortable about her constant political rhetoric."

According to the Daily Beast report, Bauer’s sister sent a letter to the court ascribing Bauer's politicization and sudden interest in the Constitution to her experience with public health restrictions on businesses during the COVID-19 pandemic. A sixth witness, who admitted to accompanying her to Donald Trump's Jan. 6 "Stop the Steal" rally, said Bauer arranged for buses to transport large numbers of people to Washington.

Bauer is scheduled to appear in court again in person later this month.