PHILADELPHIA (KYW Newsradio) — A layer of broken glass blanketed North 52nd Street on Tuesday, close to where a man was shot and killed by police in Cobbs Creek on Monday. Many West Philadelphians are still processing what happened as protests continued for a second straight night.

Police were called to 61st and Locust streets for a domestic disturbance Monday afternoon, where they say a man was waving a knife erratically. They told the man to drop the knife, but they say he did not comply. The situation escalated, and two officers shot the man, who was later identified as 27-year-old Walter Wallace Jr.

Several businesses were broken into and ransacked overnight — another blow to an already traumatized neighborhood. 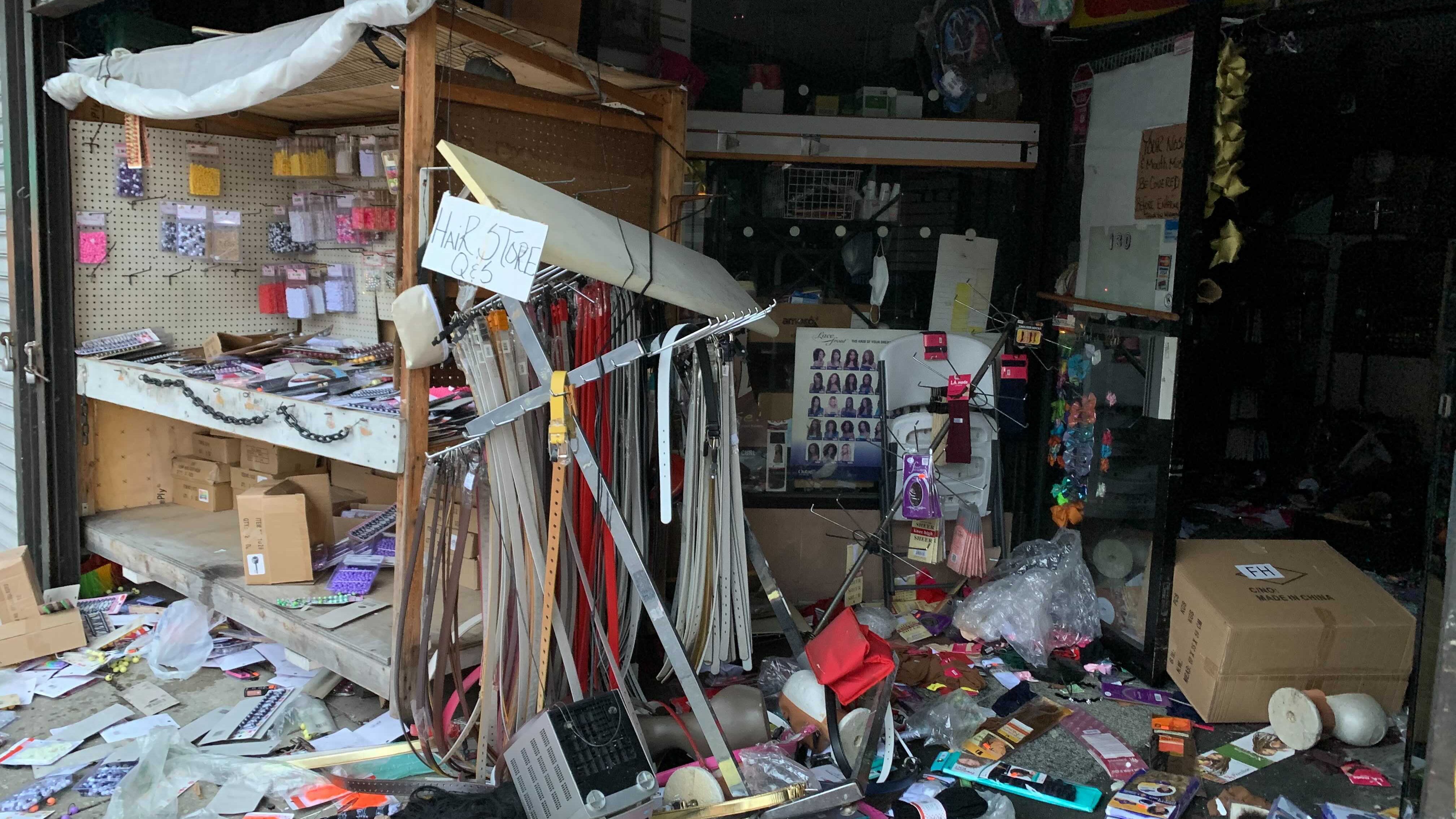 The commercial corridor is still healing from the damage done during the summer riots in response to the death of George Floyd.

“It shouldn’t have been this, but this is all we got,” said 44-year-old resident Edward. He stood in front of a Snipes sneaker store on 52nd Street as teens looted it. “We’ve been belittled so low to this, this is what we have.”

Went inside of the #snipes on N 52nd Street. Lots of damage after looting overnight. Fire was started. Lots still happening in #WestPhilly following death of #WalterWallace. More on @KYWNewsradio pic.twitter.com/pH10IkLouC

Shout out to @TheRealMannwell for putting out a fire near N 52nd Street as part of aftermath of #WalterWallaceJr shooting.

Praying for our city as residents process what happened last night. pic.twitter.com/oKaDX7QpTL

The more I learn about the shooting of #WalterWallaceJr the more I realize how much policing needs to change. This #CobbsCreek community is traumatized, and now #WestPhilly is damaged and the ripple effect will continue.

Prayers to the family and for this city. #VOTE pic.twitter.com/NHXI3iyPpk

Arnett Woodall owns a produce shop near 62nd and Market streets, blocks from the scene. He said police should not be the answer to domestic calls like this one.

“Community policing can’t be done by the police because we’re the community,” he said.

For others, the shooting is too much to handle.

“We’re not supposed to destroy our neighborhood. There is no excuse for us doing this,” said a longtime West Philadelphia resident, who preferred not to be named.

At a city press conference on Tuesday, officials addressed the shooting briefly, though they couldn’t reveal much because the incident is still being actively investigated.

Mayor Jim Kenney said he spoke with Wallace’s wife, mother and father on Monday. He said the police department will conduct a full investigation.

We're committed to a quick and transparent resolution for the sake of Mr. Wallace, his family, the officers, and for Philadelphia. Last night, we saw further evidence of the anguish of our Black and brown residents who have struggled their entire lives under systemic racism.

Police Commissioner Danielle Outlaw acknowledged the anger and sadness of the community, noting the emotions were not lost on her. She added that everyone — police, neighbors, the community at large — will be forever changed by what happened.

“There are many questions that demand answers,” she said.

She lauded the peaceful protesters who initially gathered at Malcolm X Park, but condemned all criminal activity, as they were not part of the protests.

Monday night into Tuesday, 30 officers were injured. All but one have been treated and released, mainly for cuts and bruises after being struck by rocks or bricks. One sergeant is stable but remains hospitalized for a broken leg. Outlaw said she was intentionally run over with a pickup truck.

Eight police cars were damaged or vandalized, including one that was set on fire. One medic unit vehicle was also vandalized.

As of Tuesday afternoon, 91 people were arrested overnight amid the rioting.

A spokesperson from the governor’s office said at the request of the county, “several hundred” members of the Pennsylvania National Guard will be in Philadelphia “to protect the right to peacefully assemble and protest while keeping people safe.”

Due to the unrest, the School District of Philadelphia has closed all school buildings except those being used as early voting centers. District headquarters will remain open.

The Philadelphia District Attorney's Office is also conducting its own investigation.

District Attorney Larry Krasner said they have limited information at the moment but that his office isn’t out to get anybody, they just want “even handed justice.”

"What that, of course, means is that we have to get all the information, consider it carefully, find the facts, consider the law, and go wherever they lead us, regardless of who it makes happy, who it makes sad or what the politics are around that,” Krasner said.

He said he has seen the video circulating on social media, and his office has received some of the police body camera footage, but not all.

Many in the community and on social media have questioned why guns were used on Wallace as opposed to a less deadly weapon, like a Taser.

The simple answer: Outlaw said these officers have not been assigned Tasers, which is common in the department.

“Every police officer is not issued a Taser at this time,” she said, “and when we went back during this last budget cycle, we requested additional funding so we could outfit our additional officers with Tasers.”

Each officer fired approximately seven shots at Wallace, according to Chief Inspector Frank Vanore. Police do not yet know how many bullets hit him, as the investigation is ongoing.

“It is not our intent by any means to be tightlipped or closed-mouth about what we do know and when, but we have to be very prudent in ensuring the officers’ due process,” said Outlaw.

Fraternal Order of Police Lodge 5 President John McNesby said in a statement: “We ask the public for its patience as this investigation moves forward. … The use of lethal force is a very difficult decision and we support our officers as they worked to resolve this incident under a great deal of stress. These officers were aggressively approached by a man wielding a knife.

“We’re confident that investigators will conduct an exhaustive and transparent review of all the facts related to this tragic incident.”

Sources say the two officers have been with the department for a few years.

Interviews with them will be conducted in the coming days. Police do not yet know what the officers knew at the time that they responded, what was put out by radio, or how any previous contact with Wallace factored into what transpired.

“It really is about what the involved officer perceived, experienced, what they were thinking at the time they made the decision to use force,” Outlaw added.

She said they will make a decision in the next few days whether or not to release the body camera footage to the public.

Walter's family said they had called for mental health services.

Wallace’s cousin, Pastor Roosevelt Grant III, spoke on behalf of the family, saying he believes systemic racism is at play in the police force, otherwise his cousin would still be alive.

“We just saw video where the same thing happened to a white person and the police backed up, they did not use deadly force. And I don’t think deadly force in this case was justified. That’s the bottom line. My cousin is dead today because of problems in the system that need to be fixed,” he said.

Police, law makers, religious leaders and people in the community meet in West Philly to talk about the fatal police shooting of #WalterWallaceJr @KYWNewsradio pic.twitter.com/HC7b8xzptH

State Sen. Anthony Williams showed a video that captured the shooting, and said there were a number of breakdowns in the incident that are “unacceptable.”

“They want something to happen now and they should. You know, it was kinda clear from the video that all the procedures and policies that are in place to prevent something like that from happening collapsed,” Williams said.

He called for an immediate change to policing procedure and policy in Philadelphia.

Many local leaders were present at the church, including Kenney.

Hundreds of people continued to come out for a second night of demonstrations, calling for justice and police reform. The night started off peacefully, with large protests concentrated around the 18th Police District building.

Protesters for #WalterWallaceJr as far as the eye can see on 55th and Pine in West Philly pic.twitter.com/VZJoXMw0f4

One of hundreds of protesters, a man named Shakir, who declined to give his last name, said he was so appalled by video showing two Philadelphia police officers shoot and kill Walter Wallace Jr., that he decided to come out to Tuesday.

"It makes me angry. It's like, why can't we just take care of each other? We already got enough people dying from the virus and what not," he said.

"They need to realize there are more humane ways to deal with folks who have trouble in our society. You don't have to immediately jump to lethal force."

Like many protesters, Shakir said policing methods must change in Philadelphia.

"Police don't have the necessary training," he said. "Get them trained, or you're going to keep hearing the voice of the people. And it's going to be a continuous cycle, where nobody is happy, if they can't get right and treat us right."

Protesters later pulled away from the precinct and marched down 53rd Street before groups started dispersing. Some kept on with the chants, while others were seen throwing water bottles and rocks and other items at police officers.

Police were backed up for a while before pushing back at the protesters. The night saw police and protesters clash at different times. Dumpsters were set on fire, and other property was destroyed.

In Port Richmond, Philadelphia police said hundreds of people were looting businesses around Aramingo and Castor avenues and advised people to stay away at around 9 p.m.

Many were seen running into stores in the strip mall there and taking what they could, and young people with masks were dropped off by cars to run into stores.

Lots of looting on Aramingo Ave, not much of a police presence as chaos ensues @KYWNewsradio pic.twitter.com/giAJSWqCQq

Police later showed up, but many weren't deterred until a few hours later.

Police also said there was a double shooting amid the looting at approximately 8:45 p.m. One of the victims is a 15-year-old girl who is now in stable condition.