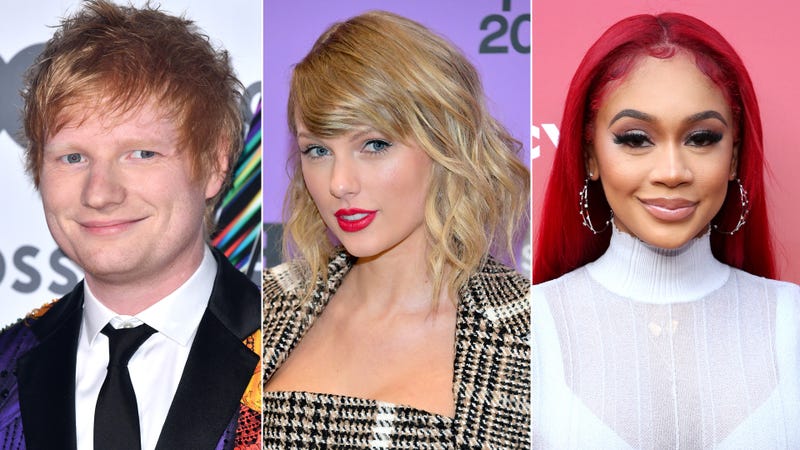 Good news! Saturday Night Live just announced their schedule of hosts and musical guests for the month of November, and it looks like the stage and set will be on fire for the next few weeks.

Actors Jonathan Majors (Lovecraft Country) and Simu Liu (Shang-Chi and the Legend of the Ten Rings) will make their hosting debuts with Taylor Swift and Saweetie set as their respective musical guests later this month. Plus, it looks like Ed Sheeran will indeed perform on the show this weekend (Nov. 6) despite recently testing positive for COVID -- while actor Kieran Kulkin is set to host.

Saweetie will be making her SNL musical debut on November 20 ahead of the release of her debut album, Pretty Bitch Music, which is scheduled to arrive in 2022. The newest addition to the Marvel Cinematic Universe, Simu Liu will provide hosting duties. Saweetie was recently a part of Audacy's We Can Survive concert at the Hollywood Bowl in Los Angeles, on October 23. Check out our backstage chat with the "Icy" rapper right here.

Taylor Swift will provide SNL's mid-month musical moments on November 13, while actor Jonathan Majors will host in celebration of the release of his new Netflix film The Harder They Fall.

This appearance will mark Taylor's (count it) fifth appearance as SNL musical guest and happens just one day after the release of her re-recorded album Red (Taylor's Version).

Perhaps the best news to come from Saturday Night Live's announcement is the confirmation that Ed Sheeran will perform on the show the weekend of November 6. It was all up in the air after Ed received a positive COVID test but he's since been cleared and says he's "excited to hit the ground running with work again, and SNL is still on, so tune in Saturday." Kieran Kulkin will host.

Sheeran just released his highly anticipated fourth studio album, = (Equals), last week featuring 14 new tracks that were recorded amid a number of life milestones for the best-selling singer and songwriter. He explains, "this album was inspired by me becoming an adult for the first time... having a kid, getting married, losing a friend." Go inside the making of = with Ed right here -- and celebrate his new release with our exclusive station full of Ed Sheeran's Favorites.