Richmond, Va. (Newsradiowrva.com) - Senator Bernie Sanders (I-VT) made a campaign stop in Richmond Thursday afternoon, sounding much more like the man who had won the Democratic nomination, than a candidate competing for it.  Sanders only mentioned two of his primary opponents, Joe Biden and Mike Bloomberg, by name, and focused much of the speech on President Trump and on health care. 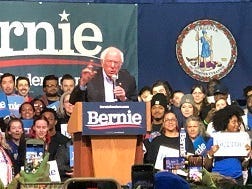 Sanders spent a good deal of his speech focused on "Medicaire for All," a primary pillar of his campaign.  Sanders told the crowd that it is embarassing the United States does not guarantee health care as a right.  Sanders promised to lower drug and health care costs, and to raise teacher salaries, although the speech did not include any specifics on how to accomplish any of it.

Many of those in the crowd were true supporters, several of whom supported the last run he made in 2016.

The Virginia primary is Tuesday, when several states hold their primaries.