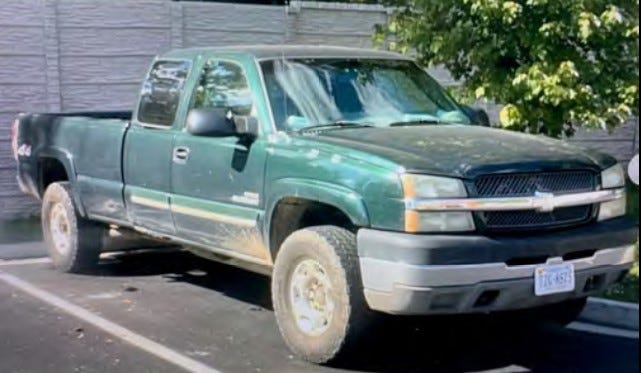 Hanover County, Va. (NewsradioWRVA.com) - UPDATE: Hanover Sheriff's Deputies say Christopher Chivily was arrested in Custer County, Montana, which is in the eastern part of the state.

ORIGINAL: On Monday, September 5, 2022, at approximately 4 p.m., deputies responded to the area of Mountain Road and Overhill Lake Road in reference to a road rage incident where shots were fired.

After a thorough investigation, the green Dodge pickup was located and a suspect has been positively identified.

Christopher Nicholas Chivily is currently wanted by the Hanover County Sheriff’s Office for Attempted Murder, Shooting from a Vehicle, Shooting at an Occupied Vehicle, Possession of a Firearm after being Voluntarily Committed and Vandalism.

Chivily is believed to be in the Goochland area operating a green 2003 Chevy Silverado, bearing Virginia tags TZG-8575. As he is also believed to be in possession of a firearm, he should be considered armed and dangerous.

Anyone with information regarding Christopher Nicholas Chivily’s whereabouts is asked to contact the Hanover County Sheriff’s Office at (804) 365-6140 or the Metro Richmond Crime Stoppers at (804) 780-1000. Citizens can also download the “P3 Tips” app for their mobile device to submit their tip. Both Crime Stoppers methods are anonymous.