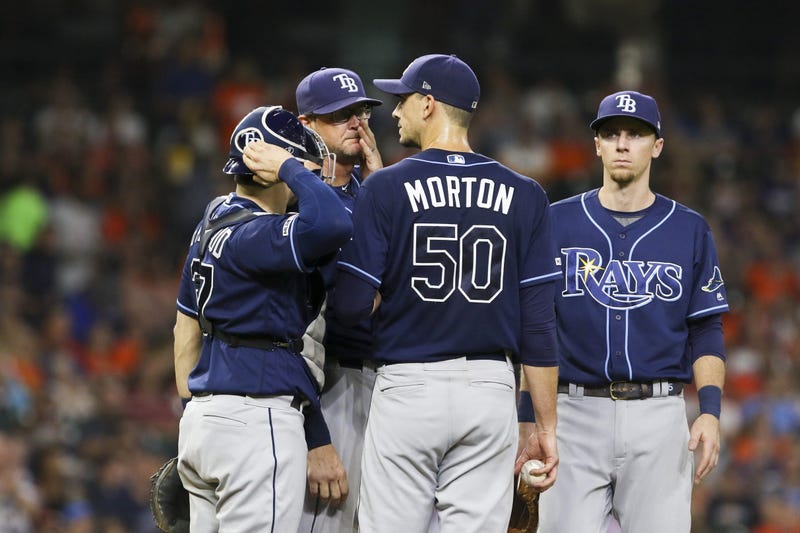 The Astros played a 60-second tribute video as Morton went through his pre-start routine, and the Rays righthander faced the minimum during the game's first two innings, but the game turned in the third.

Following leadoff walks to Abraham Toro and Robinson Chirinos, Josh Reddick doubled to bring home the game's first run. The next batter, George Springer was hit by a pitch to load the bases, and the Astros added to the lead when Jose Altuve grounded into a doubleplay. The Astros jumped on Morton in the next inning as Yuli Gurriel doubled home Alex Bregman and Yordan Alvarez, making it a four-run game. After a ground out, Robinson Chirinos smacked a first pitch curveball from Morton for his 15th homer of the season, pushing the Astros lead to six.

With Morton out of the game, the Astros piled on to their lead against the Rays bullpen. With Michael Brantley and Bregman on base in front of him, Alvarez floated a 2-1 fastball from Andrew Kittredge into the Crawford Boxes for his 20th Major League home run, and in the sixth, the Astros knocked around Chaz Roe for five more runs, making it 14-0.

In the seventh inning, the Rays turned to infielder Mike Brosseau to eat up two innings and he was able to hold the Astros to one run, which came home when Alvarez his second home run of the night on a pitch that registered at 58.5 MPH.

Jake Marisnick didn't start the game, but he drove home a pair of runs as did Gurriel and Chirinos.

All that offense was in support of Justin Verlander, who held the Rays off the board for five innings, but his night ended early in the sixth after getting ejected by home plate umpire Pat Hoberg ejected him following Tommy Pham's one-out double. Brad Peacock replaced Verlander and stranded Pham, keeping Verlander's clean line intact. He allowed four hits and struck out four, earning his 16th win.

Joey Wendle led off the seventh and ended the Astros shutout bid with his seventh home run of the season. Collin McHugh and Joe Biagini recorded the game's final six out as the Astros increased their winning streak to five games, improving to 86-47 on the season.

Gerrit Cole will take the mound for the Astros in the middle game of their three-game series against the Rays opposite lefty Ryan Yarbrough.