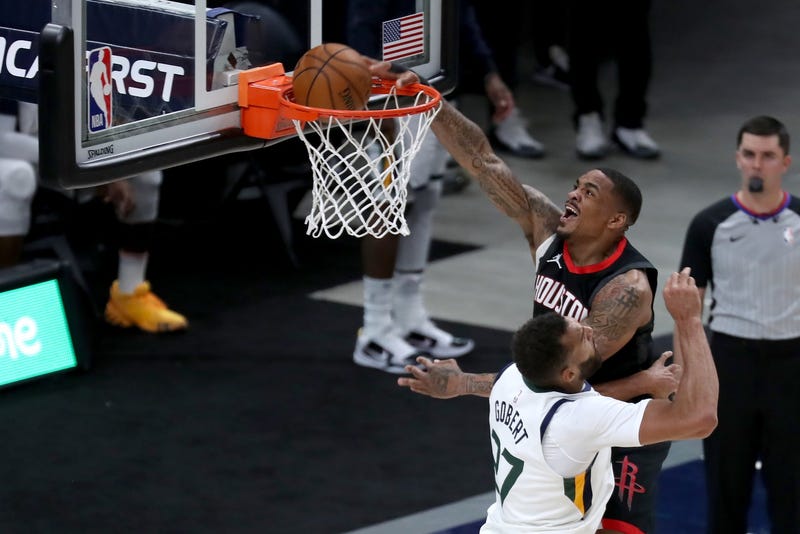 The Jazz finished 5-0 on their homestand despite missing All-Stars Donovan Mitchell and Mike Conley again.

Niang took advantage of some post-ups in the paint and was a sharpshooter from beyond the arc. Starting just his eighth game, Niang scored 10 points in the third quarter and his 3-pointer with 2:50 left in the period gave Utah its largest lead, 96-75.

The usually mild-mannered Niang was so fired up, he drew a technical for taunting after draining a 3 that tied his career high of 24 early in the final period. He was 6 of 8 on 3-pointers.

Rudy Gobert had 13 points and 14 rebounds for the Jazz.

The Rockets have lost five straight and 20 of their past 23 games. They clinched a bottom three record with Saturday's loss and will have a 52.1 percent chance of landing a draft pick in the top four.

The Rockets clinched a bottom 3 record with tonight’s loss. They will have a 52.1% chance of landing a pick in the top 4. Start praying, folks

Khyri Thomas and KJ Martin each had career highs of 27 for Houston. Thomas has scored 47 in two games with the Rockets, and Martin marked his third straight 20-point game and fourth of his career.

Both teams were playing the second part of back-to-back, which led to some sloppy play. The Jazz improved to 12-2 on zero days rest.

The undermanned Rockets were forced to roll out a starting lineup with Martin at 6-foot-7 as the tallest player to face the 7-foot-1 Gobert. Danuel House Jr. and D.J. Augustin moved off the injury report and onto the court for first time in weeks to give Houston eight available players.

Jazz: Clarkson has made a 3 in 90 straight games. … Utah outscored Houston in the paint, 56-46. … The Jazz swept the season series with the Rockets, 3-0. … Ingles got a technical foul with 2:10 remaining and then left the game.

Rockets: At Portland on Monday night.