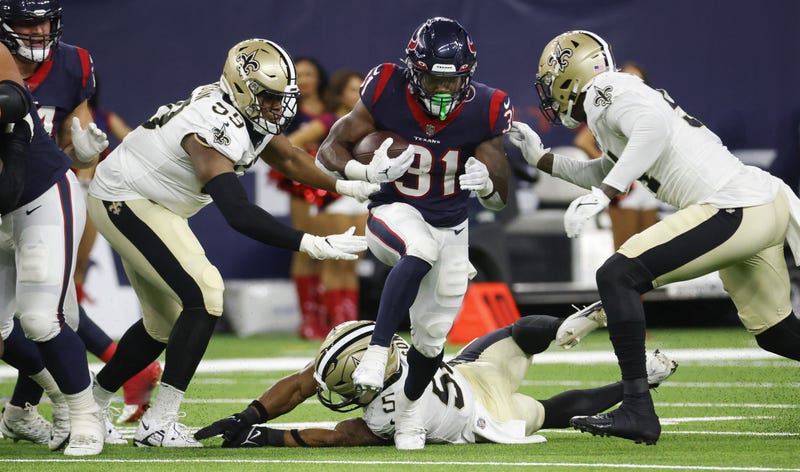 HOUSTON (SportsRadio 610)- To say Dameon Pierce was nervous going into his first NFL preseason game would be an understatement.

“Man, if y’all only knew what these last 24 (hours) was like for me,” Pierce told reporters after the Texans 13-10 win over the New Orleans Saints. “My head was racing, my heart was pounding, I’ve been jittery since last night.”

Pierce settled down a bit as kickoff at NRG Stadium neared, but his heart was pounding as he waited for Texans running backs coach Danny Barrett to call his name. It took a quarter for that to happen, but he took advantage when it was his turn. On his second play from scrimmage, Pierce made multiple Saints miss on a 20-yard scamper, and he was off from there.

“I just tried to make a play when my number was called. That’s what it comes down to. Great blocking, they allowed for me to cut back and then I tried to sprinkle a little bit of magic in there.”

The fourth-round pick out of Florida carried the ball five times for 49 yards. Marlon Mack and Royce Freeman combined for 31 yards on 15 carries.

Pierce has impressed in camp thus far, and after finishing with the NFL’s worst rush offense a season ago, the Texans hope he can provide a jolt to that attack, and he posses the skillset to do just that.

“He can make you miss,” Texans head coach Lovie Smith said. “He can cut on a dime. Catch the ball. There are some things that he can do well that you'd expect a good running back in the NFL to do.”

The Texans listed Pierce behind Mack and Rex Burkhead in an unofficial depth released on Thursday. The rookie provides the most upside with Burkhead recently celebrating his 32nd birthday and Mack working himself back from an achilles injury with the Colts two years ago, but Smith said it’s premature to say he’d be the starter when the Texans host the Colts in week one.

“We're in no big hurry. It's a while before Indy gets here. Dameon has been impressive in practice, and we expected him to come tonight and do some of the things that he did. We'll just keep fighting through. Next week, another guy may have a good game. But it's safe to say that we like Dameon for sure.”

Pierce ran for a first down on 2-of-5 carries Saturday night. His other three rushes were for six, seven and nine yards on first down and ten.