Juan Soto asked MLB officials to move the makeshift mound back a few feet before he started his Home Run Derby quarterfinal against Jose Ramirez – and he made it count on his first swing, launching a 421-foot dinger to kick off his run.

He then made it count on 50 more swings over three rounds, hitting a grand total of 53 official dingers to win the 2022 MLB Home Run Derby.

Soto’s first dinger went to dead center field, and when he called timeout just over 90 seconds later, he had 10 – more than halfway to the 18 he needed to defeat Jose Ramirez’s 17. He needed four swings to get back on the board after that, but he didn’t even need his 60 seconds of bonus time, walking it off with a bat flip after crushing his 18th dinger of the round, a 385-footer just before the buzzer on his initial three minutes.

He then advanced to the semifinals where, instead of No. 1 seed and NL home run leader Kyle Schwarber, he got No. 8 seed Albert Pujols, the active MLB home run leader who upset Schwarber 20-19 in a swing-off in the quarters.

Pujols went first and hit 12 in his initial three minutes and in his 30 bonus seconds, finishing with 15, and Soto asked for the mound to be moved back again before hitting in the semis. This time, however, Soto needed 45 seconds and several swings to get on the board, and called timeout halfway through with just six dingers. 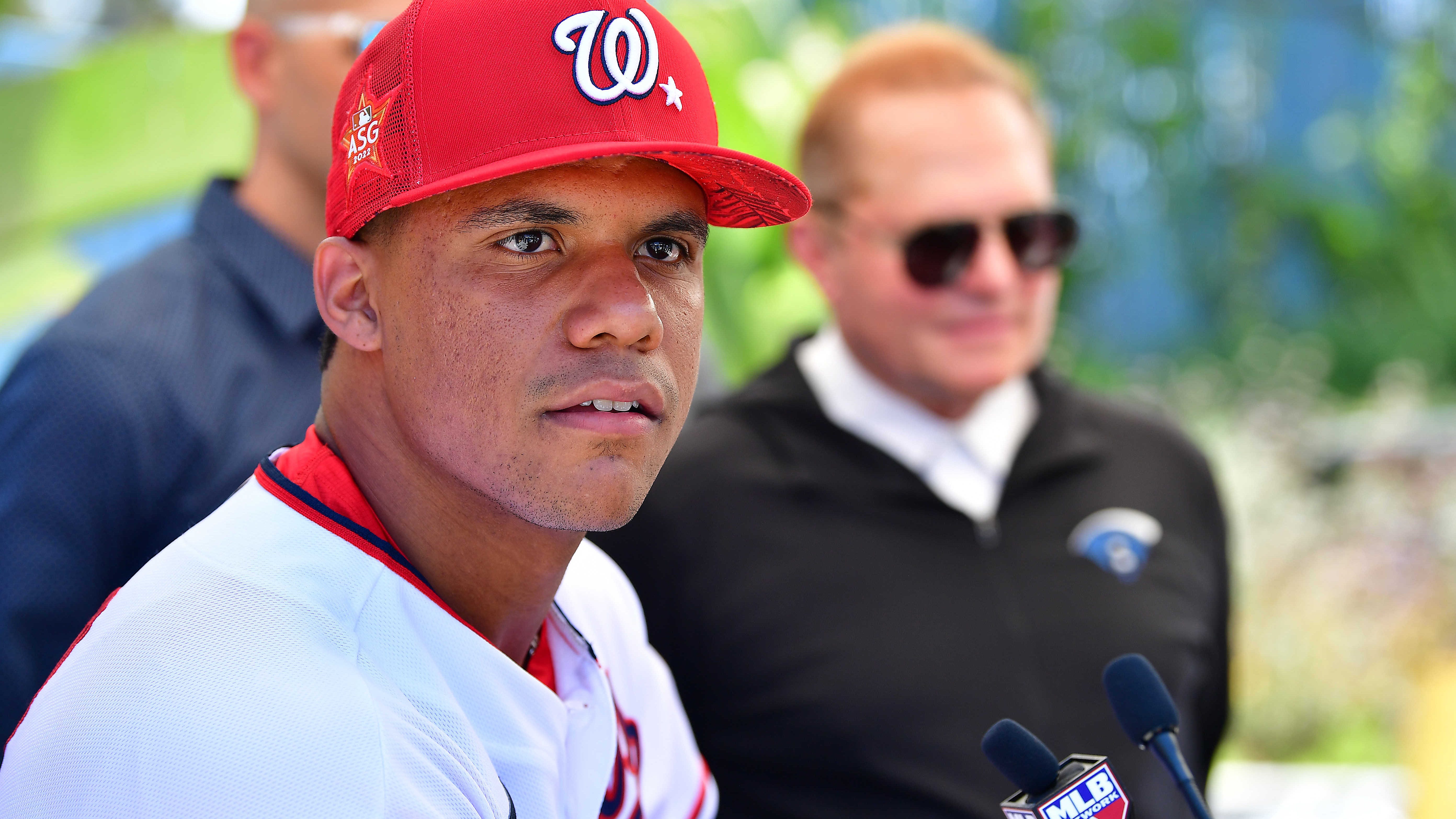 It took Soto a few swings to get back on the board and he finished regulation with 13, but got the extra 30 seconds for hitting a pair over 440 feet so he had one full minute in the bonus round – and he only needed a few seconds of that if any, getting three more dingers quickly and advancing with a 16-15 win over the legend.

That set up the first-ever final between two players 23 or younger, as Julio Rodriguez – who had 32 and 31 homers in the first two rounds and eliminated two-time defending champ Pete Alonso in the semis – awaited in the final round.

Contestants got just two minutes in regulation in the finals, and Rodriguez started his time off with an immediate dinger – but he had just seven in the first 63 seconds before calling timeout. He had seven more in the final 57 seconds to reach 14, but did not hit a second homer more than 440 feet, so he only got the first 30 seconds of bonus time, and he hit four more in that 30 seconds to finish with 18.

Soto stepped up needing to hit 19 for the first time all night to win the trophy, and it took him more than 30 seconds to get on the board – but once he did, he did so with a flourish, banging 10 bombs in roughly a minute before calling time with 32 seconds left. 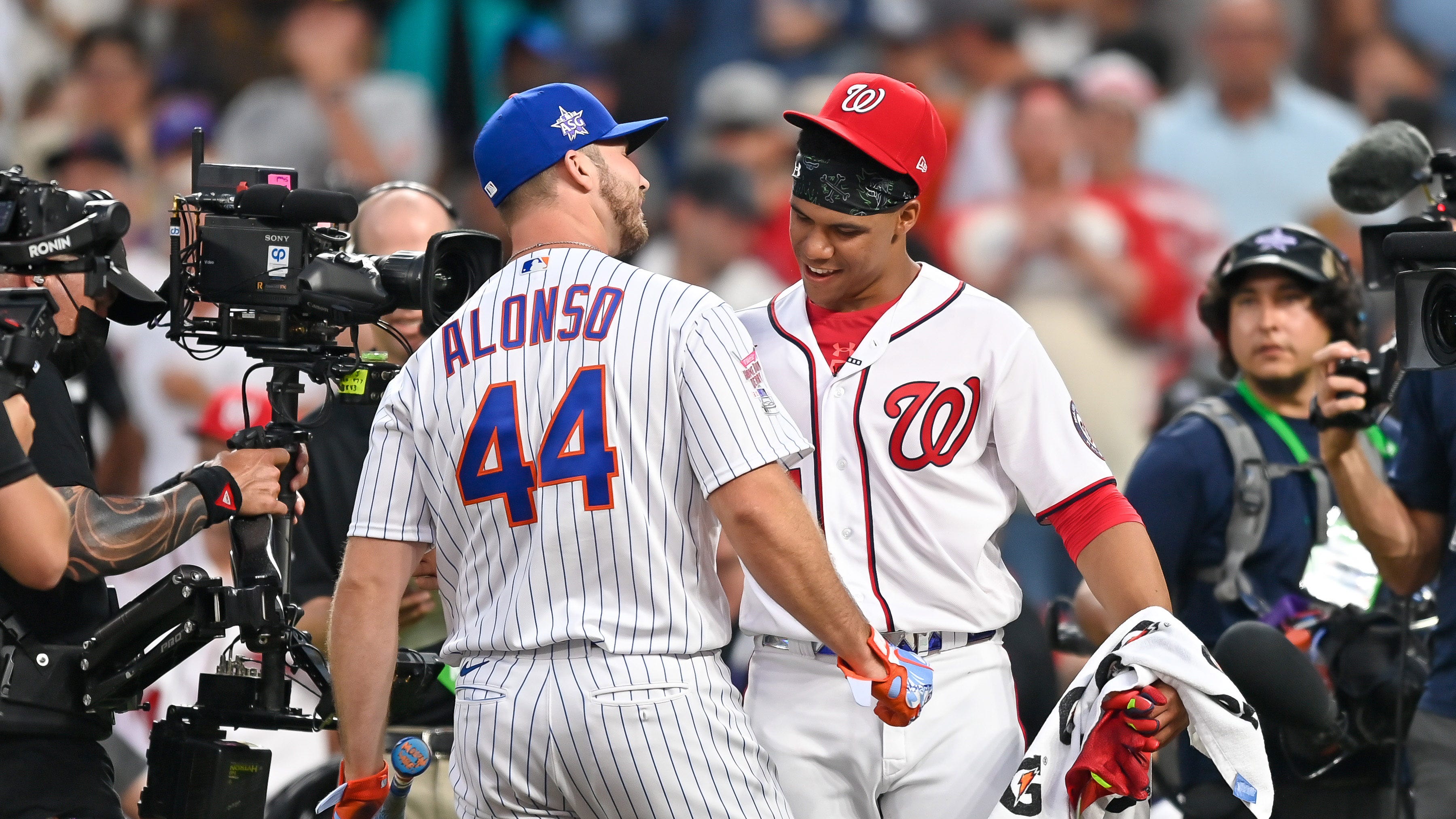 The 23-year-old bashed five more in the final 32 seconds to have 15 at the end of regulation, needing four in his bonus minute to become the champion.

You can guess what happened next, right?

It took a couple swings to get in the groove, but Soto hit four in a row to tie, and he walked it off with three in a row – only one of which needed to count – to get to 20 and win the championship, as well as the Home Run Derby necklace from Alonso.

“It feels amazing. Tiring first of all, but amazing. All the hard work I put in, it feels amazing,” Soto told ESPN’s Buster Olney after the win. “My strategy worked well; I just tried to square up balls and drive them because I know I have the power to hit them out.”

Soto also praised Rodriguez’s showing, and when asked about his own future, he finished the interview in the present, not the future.