Gerrit Cole lasted just two-plus innings in the American League Wild Card Game, replaced by Clay Holmes after allowing a solo homer, a single, and a walk to open the third inning.

Nothing physical with Cole, Yankees manager Aaron Boone told the ESPN broadcast during an interview in the fourth inning, just “it was time” to make a change.

“Just felt like it was time. We’re set up back there and going through a tough part of the lineup,” Boone said. “I felt like Holmes could put the ball on the ground in that situation and get us out of it.”

Holmes did indeed, striking out Xander Bogaerts before inducing a 5-4-3 double play off the bat of Alex Verdugo, leaving it 3-0 through three innings.

Just what Boone and the Yankees needed, and hopefully, foreshadowing things to come from the relief corps. 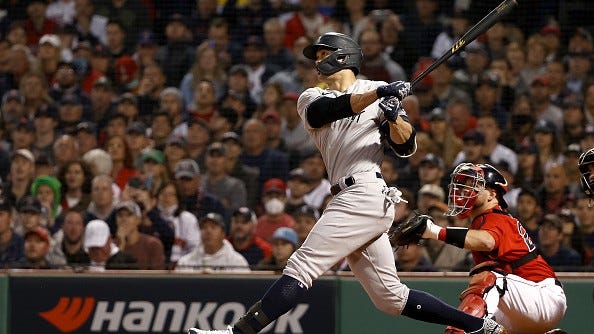 “When I went out there, I said we have to keep it close, hand around, and claw our way back into it,” Boone said. “We’ll take this thing in the second half.”

Unfortunately for the Yankees, Cole’s short outing continued two ignominious trends; the righty has now allowed 19 runs in 24 2/3 innings over his last five starts since an extended absence due to hamstring tightness in early-September, and 14 earned runs in 18 innings over four starts at Fenway Park this season.