Urban Meyer may no longer be the head coach of the Jacksonville Jaguars, but he is still causing problems for the franchise.

According to Rick Stroud of the Tampa Bay Times, kicker Josh Lambo has filed a lawsuit against the Jaguars alleging that Meyer created a hostile work environment and that his performance suffered as a result of the head coach kicking and verbally abusing him.

Lambo filed the suit in the 4th Judicial Circuit Court in Duval County on Tuesday and is seeking his $3.5 million salary for 2021, plus damages for emotional distress.

The veteran kicker was arguably the final nail in the coffin for Meyer’s tenure with the Jaguars after he alleged in December that the head coach kicked him in the leg while stretching after he missed a field goal attempt in each of the team’s first two preseason games.

Lambo told Meyer not to kick him but claims Meyer yelled back, “I’m the head ball coach, I’ll kick you whenever the f—k I want.”

Per the lawsuit, Lambo reported the incident through his agent, who contacted the Jaguars’ legal counsel the next day.

Because Lambo, who did not make the team, reported the incident to the team’s legal counsel, his subsequent release violated Florida’s Private Sector Whistle Blower’s Act, the lawsuit claims.

The Jaguars maintained to the Tampa Bay Times that they offered Lambo a chance to meet with him after the incident, but Lambo claims he has “no recollection of being able to speak with the Jags’ legal team.”

Meyer, on the other hand, has since denied the incident happened the way Lambo described.

The lawsuit, according to the Tampa Bay Times, requests documentation of all communications between Jaguars employees relating to reports made by others in the organization of unprofessional, bullying, abusive or toxic behavior by Meyer in the workplace. It also asks for documentation of Meyer’s termination and any documents that show he was fired for his workplace behavior and treatment of employees.

Meanwhile, the Jaguars have yet to reach a settlement with Meyer on paying out the remainder of his contract because they say he was fired with cause. 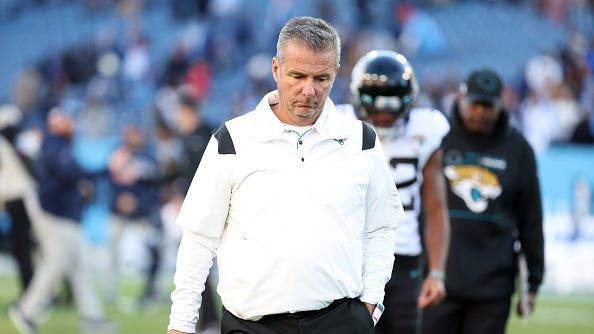 Shad Khan lost respect for Urban Meyer: 'How can you work with someone like that?'