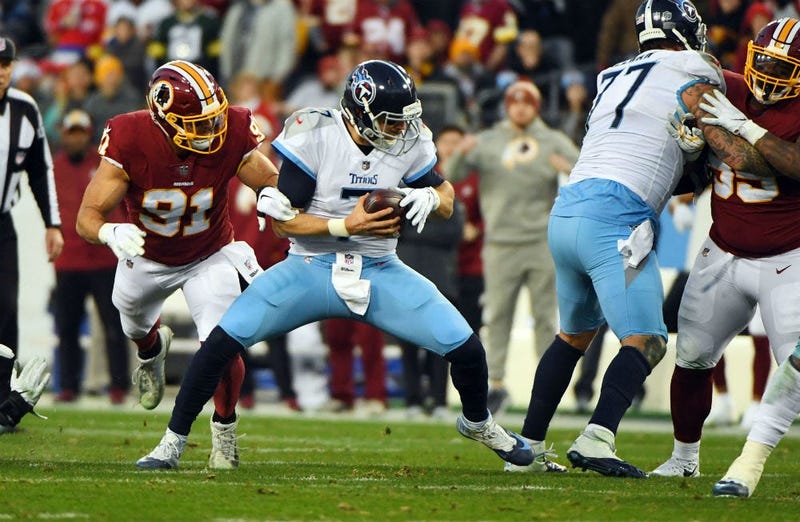 106.7 The Fan Redskins beat reporter Craig Hoffman was in the press box at Nissan Stadium as the Washington Redskins took on the Tennessee Titans in Week 16 of the season. He combined his observations with post-game interviews to write his top-three takeaways from this week in football:
NASHVILLE, Tenn. – The Redskins lost to the Titans 25-16 Saturday night, essentially ending their season. The game had a lot, but the postgame is what everyone will be talking about thanks to one particular player yet again.

1.    D.J. Swearinger finally let loose on defensive coordinator Greg Manusky. After passive aggressively skating around criticizing him, Swearinger went off after the loss.

“I feel like we should’ve been more aggressive,” Swearinger said about the late game play that ended in an illegal contact call on Fabian Moreau. “Feel like in 3rd down and six playing a backup quarterback why would you put us in man-to-man? We’re at our best as a defense when we have our eyes on a quarterback. When you go one high on a backup quarterback? That's easy man! They gonna go backside every time. It’s a bad call. It’s a horrible call. You don’t put Fabian in that situation on a backup quarterback. Regardless of the call, the ball was overthrown. But I just feel you put us with our eyes facing the quarterback with all the talent we have on the back end, we could dominate every team every week.”

Swearinger’s comments have some merit, but that is fundamentally irrelevant. Players shouldn’t talk about coaches like this. Teams that win are teams that are together from front office to coaching staff to players to equipment staff to every other part of the organization. Swearinger thinking he’s smarter or knows better than his coaches sows discord and a lack of trust by the players in the coaches and the play calling. Football must be played with confidence. Confidence and doubt do not go together. Swearinger even said he watches more film than the coaches, something he cannot prove even if he watches as much as any player I’ve ever covered. It doesn’t matter. He’s a player. They’re the coaches.

With the playoffs all but out of the picture, the Redskins have a decision to make. Do they let these comments go for a fourth time in Swearinger’s tenure? Or do they suspend him for the final game and decide in the off-season to keep him or not.

2.    As to the merit of Swearinger’s comments – there is some. This team has probably been a better zone than man team over the year. However, Swearinger’s specific comments are bizarre for a player who is as smart as he is.

“If I’m the d-coordinator, I’m calling zone every time on 3rd down every time cause you got a backup quarterback,” the safety said. “Make him beat us. Make him (think), 'Oh okay, it’s zone. Go here.' I’m gonna go pick you off. If it’s man, 3x1, you’re going back-side every time. A kindergarten quarterback knows that man.”

The Redskins have been smoked all year by three wide receiver route combinations against man coverage on third downs. Moreau actually had the easiest job of any DB on the field. No picks. No confusion. Simply cover the man in front of him. He failed to do so without making illegal contact. It was called. First down, Titans.

Swearinger wants to talk about all the talent, but talent is most evident when it is man versus man. It is simply who is better on that particular snap. If the Redskins can’t be better than this Titans core of receivers with Blaine Gabbert throwing, they don’t deserve to win.

3.    Adrian Peterson is on a short list with the likes of LeBron James, Usain Bolt and Michael Phelps as the rarest of physical specimens. Even amongst the world’s best athletes, he is special. In Week 16 of a season he never thought he would have, Peterson crossed the 1,000 yard plateau in the 4th quarter of the Redskins loss Saturday. He looked like the freshest player on the field as the Redskins closed the game. He’s 33 years old. He had no training camp. He had no offseason program other than the one he puts himself through at the gym he owns with Trent Williams, O Athletik, in Houston.

Peterson finished with 119 yards on 26 carries and he was the most consistent offensive force for a Washington team that was beyond limited with no Jordan Reed or Vernon Davis, their 4th string quarterback and some number string guard. (I lost track four guards ago.)

Peterson’s effectiveness made the decision to be deliberate on the final drive even more puzzling. If the Redskins had run tempo, even with running plays, they would have gotten more Peterson on the field. Instead they took their time, eventually got in a passing situation and Josh Johnson was intercepted to essentially end the game.

Yet, Peterson blamed himself for the loss. He pointed to a 3rd-and-1 late where he plunged for a first down instead of bouncing it outside. “I would’ve hit my head on the goalpost,” he said.

Covering him has been a tremendous look into true greatness. It was on display again Saturday, even though his team did not come out on top.

Stat of the day: The Redskins 17 play scoring drive in the first half was truly astonishing. It lasted 10:58, which is 4:02 shy of a full quarter. They gained a net 93 yards on the drive, but because of penalties they actually gained 108 yards over 17 plays. Needless to say, it’s the longest scoring drive in both time and plays this season.

Quote of the day: “That’s what hurts the most. I feel like these guys are putting it all on the line. It’s too bad they couldn’t get it done.” – Jay Gruden on the continued effort of his team despite the injuries before abruptly stopping to hold in some emotion.