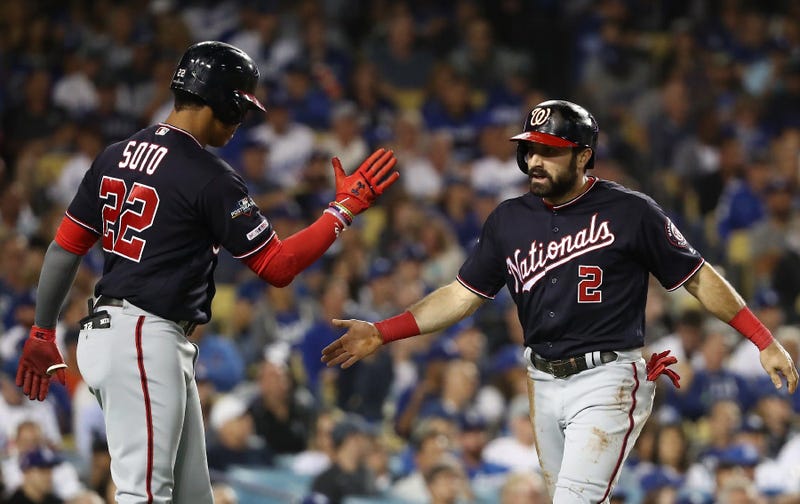 If 2019 taught the Washington Nationals anything, it’s how to break bad streaks and find a way to win without “momentum.”

In fact, 42 of the team’s 93 regular-season wins came in games following a loss, which prepared them nicely for Game 2 of the NLDS.

After an emotional Wild Card win on Tuesday, the Nats looked about as flat as you can in Game 1 in Los Angeles. They finished with just two hits and zero runs while the team’s pitching allowed six runs and nine free passes.

Friday was a totally different story, as the Nats came out swinging in the first inning. They scored just one run after loading the bases, but Dodgers ace Clayton Kershaw needed nearly 30 pitches to complete the inning.

In the second inning, the Nats mounted another rally and added two more runs, building a lead they would not relinquish.

Meanwhile, team ace Stephen Strasburg got his first start of the postseason and shut down the Dodgers offense. He went six strong innings and left with a 3-1 lead, turning it over to the bullpen.

Once again, the Nats’ relief corps brought little emotional relief until the game was over.

Sean Doolittle, the team’s only southpaw, pitched through trouble in the seventh, including a home run to left-hander Max Muncy, which drew the Dodgers within one run.

As a result, Nats skipper Dave Martinez turned to starter Max Scherzer in the eighth inning, giving him a chance to pitch relief in place of his typical bullpen session in between starts.

"I was surprised," said Dodgers skipper Dave Roberts, talking about the usage of Scherzer in the eighth inning. "We weren't expecting that."

Scherzer rewarded his manager’s confidence by striking out the side and handing things over to closer-by-default Daniel Hudson.

Hudson needed every base to stash the Dodgers runners but struck out two, including Corey Seager, for the last out of the game.

The Nats relied heavily on strikeout pitching, getting 17 of 27 outs via the K.

With the series tied 1-1, the Nats are guaranteed two home games, starting with Sunday’s. First pitch at Nationals Park will be at 7:45 PM.