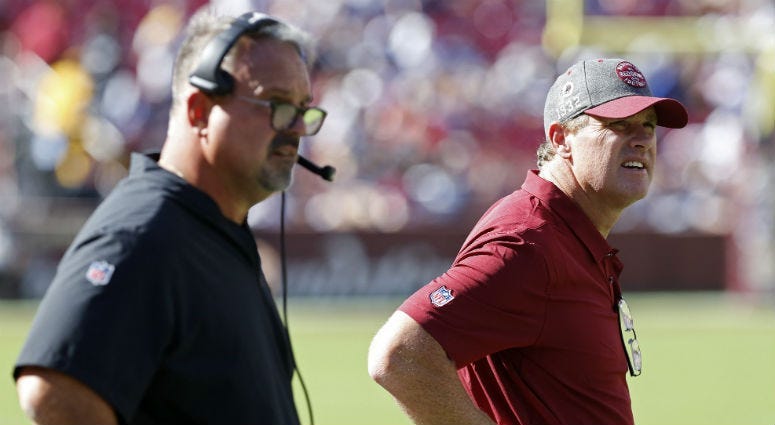 Redskins coach Jay Gruden won't fire any defensive coaches after an unexpected double routing. Sure, they surrendered 32 and 31 points, respectively, for an 0-2 start, but Gruden's not hitting "the panic button yet."
"We should be better than this," he said after a 31-21 loss to Dallas on Sunday. "That's on us, obviously as coaches, and we have to get more out of them. ...We're not reaching them."
Redskins owner Dan Snyder once left a gallon of vanilla ice cream on defensive coordinator Mike Nolan's chair as a warning to stop running plain defenses that were getting burned. Nolan was soon fired.
What's on the menu for defensive coordinator Greg Manusky? One of those really big vats at ice cream stores? If Gruden is defending his staff after just two games, the tension must be thick. Already, Gruden has a rah-rah routine down.
"I still feel very optimistic about the future of this football team," he said. "I think we can go toe-to-toe with anybody."
A bad start wasn't totally unexpected in an early schedule that features four 2018 playoff teams in five games. But, it has come in a totally unexpected way. An offense that seemed horrible has been good enough to win both games. It's the defense that collapsed.
For the second straight week, the Redskins regulars looked sharp defensively early. The Cowboys went three-out the first drive and were intercepted in the second, which led to a 7-0 Redskins lead.
And then Dallas made corrections and scored on a 51-yard touchdown. The next drive was an 83-yard grinder where a third-down holding call on the Redskins gave the Cowboys another life for a touchdown to close out the half. The Cowboys then gained that dreaded double-score by coming out in the third quarter with a quick touchdown. The Redskins counter-punched, but the Cowboys came back with a field goal and touchdown to blow open the game.
Thirty-one points over five straight drives. The Redskins once more had no solutions. The week-long planning useless, the headsets virtually silent because the only sound Washington's defense heard was one of retreat.
Forget talk of injuries and playing key reserves. Josh Norman was smoked on a couple touchdowns despite being played as a shutdown corner? Has a defensive line believed its own hype while allowing 213 yards rushing? Will first-rounder Montez Sweat start making plays?
The defense is on its heels when it's supposed to be lions, not sheep. The shepherd looks lost and so do the Redskins. Not exactly a feeling of security.
Rick Snider has covered Washington sports since 1978. Follow him on Twitter: @Snide_Remarks