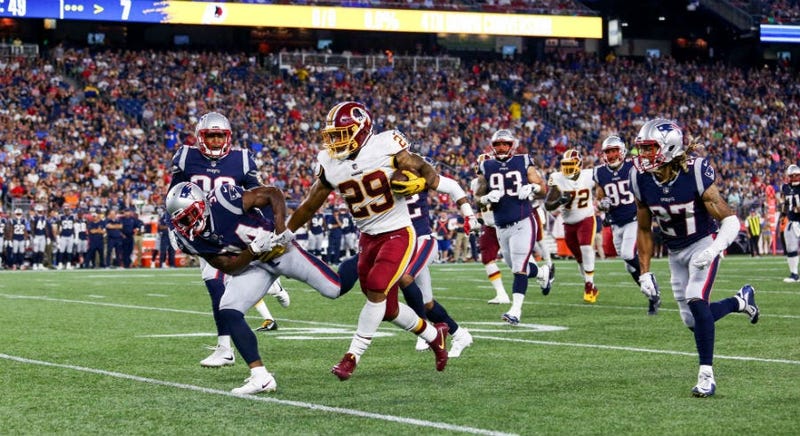 Believe it or not, training camp is almost here. After one of the most consequential Redskins off-seasons of the last two decades, we’ll start to answer the biggest questions we have about the football team.

With just days to go until Richmond, The Fan started asking our ten biggest questions about the 2019 Washington Redskins. Now we’re just four days away, meaning just four stories to go until camp.

4. Can Derrius Guice stay healthy?
The Redskins second-round pick was THE buzz of the off-season last year. He looked outstanding in training camp. In fact, he looked like a revelation right until the moment he tore his ACL in New England.

That run was everything we knew about Guice in one single play. He was fast. He was decisive. He was explosive. He had an injury history.

That history now includes an ACL recovery that met a few complications along the way. The latest was a hamstring tweak sometime in late June, per a source, that threatens to delay his training camp start by a few days. The source indicated it wasn’t a big deal and Guice’s status as a guy who would be eased in and monitored didn’t really change, but these things aren’t a big deal until they are.
That’s why this is such a massive question. Adrian Peterson was great last year and I will not bet against him being great again. However, he’s not the home run hitter he was at 24 and he’s never been a truly upper echelon pass catcher. Guice is that home run hitter and he’s got the potential to be special out of the backfield.

Simply put, Guice elevates the ceiling of this offense tremendously. They don’t have a lot of playmakers and he is one. He can score from anywhere and getting those big plays matters when you don’t have the talent to execute consistently. Not having to take 12 plays to go 80 yards is nice. Guice can do it in one.

It’s also a simple numbers game. The Redskins want to run the ball a lot. If there’s going to be 30 carries available, giving 18 of them to Guice and 10 to Peterson and two to Chris Thompson (along with his usual arsenal of screens and swing passes) is an ideal way to divide them up and keep everyone fresh.

Exactly how the carry split goes game-to-game will be a major storyline of the season, but it starts with having the projected starter and biggest threat available. That is Guice and we’ll see if he’s in uniform on day one in Richmond.

Question 10: Will Rob Ryan and Ray Horton have an impact?
Question 9: Who's the odd-man-out at middle linebacker?
Question 8: Can Montae Nicholson return to form?
Question 7: What impact will Kevin O’Connell have as OC?
Question 6: Who wins position battle at wide receiver?
Question 5: How will cornerback battle shake out?
Follow @CraigHoffman and The Fan on Twitter and Instagram.