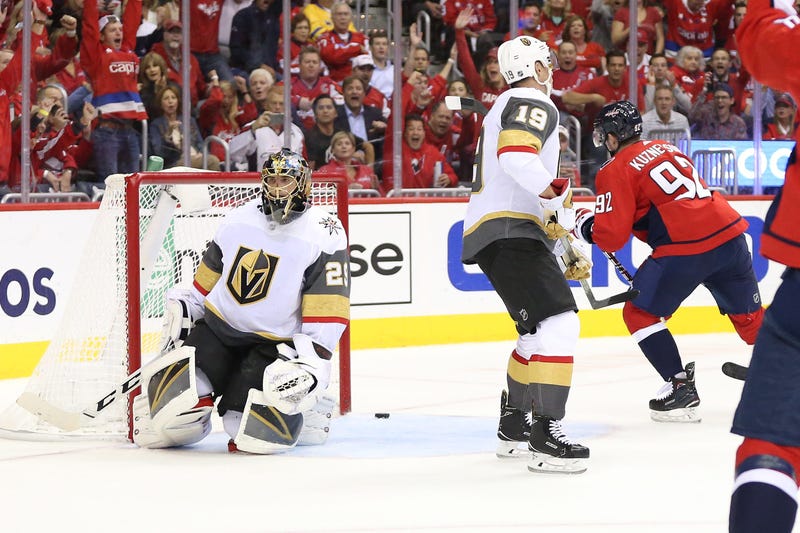 The evolution of Evgeny Kuznetsov continues year after year and at this point, night after night.

Thursday's ugly loss for the entire Capitals team aside, Kuznetsov has been brilliant through four games. A Houdini on skates and he's only getting better.

Kuznetsov has been good for a while. He was very good in the regular season last year and an assassin during the Caps' Stanley Cup run.

Yes, he scored the game-winner in Pittsburgh – part of a 12-goal, 32-point playoff run – to send the Caps to the Eastern Conference Final, but it's more than just goal scoring that has those inside the Caps organization buzzing and the hockey world taking notice.

"I think he's up there with the all-around top-five players in the league," said teammate T.J. Oshie after Wednesday's four-point, Emmy-nominated performance Kuznetsov put on against the same team he helped beat in the Stanley Cup Final. "He just doesn't get the recognition for some reason."

"You come watch a game – there's certain players that get people out of their seats and it's just a joy to watch. I'm probably a little biased because I play with him, but when you get to see what he's able to do night in and night out, I haven't seen a guy that can play with the puck like he can,"  Oshie said. "No one can carry the puck like Kuzy."

It brings Oshie genuine joy to watch Kuznetsov play: "And I don't even like watching hockey. So, when I see Kuzy going, it's one of the only times I enjoy it."

The interesting part is most observers already know that particular skill about Kuznetsov's game and were blown away by his ridiculous passing and vision.

Kuznetsov's third assist of the night was as dynamic as ever. On Alex Ovechkin's second goal of the night, Kuznetsov worked an end-to-end, give-and-go with Brett Connolly on the left side, and just before threading the needle on the pass, he deftly curled the puck back towards him to avoid a poke check, before completing the pass with a defender in between the puck and Ovechkin.

Capitals head coach Todd Reirden saluted another very important and emerging part of Kuznetsov's game, his prowess on the penalty kill and ability to win some face-offs. Reirden brought up an example late Wednesday night in a one-goal game where Kuznetsov was on the second PK unit and had to take a key face-off, because Lars Eller got kicked out of the circle.

"He ends up winning that draw, on his off-side. He's always had this great ability to make offensive plays, so I put him out in that situation, he has to win the draw and he does," Reirden recalled about a seemingly innocuous moment in the third period of a regular season game.

"That to me is him really rounding out as a player," Reirden added.

"That's something I've talked to him about. I've challenged him and said I'll use you in that situation if you can do that job for us."

On Wednesday, Kuznetsov only played 50 seconds on the penalty kill and won only 47 percent of his face-offs as a whole, but you see his entire game getting better.

In the Caps' first three games of the year, Kuznetsov had already eclipsed his ice time short-handed than he had played all of last year.

His career 45.1 face-off percentage has to be the next target. Kuznetsov must improve that part before he's truly elite.

Then he might just win a Hart Trophy to go along with the Stanley Cup. And a top-five ranking in the game, as Oshie said?