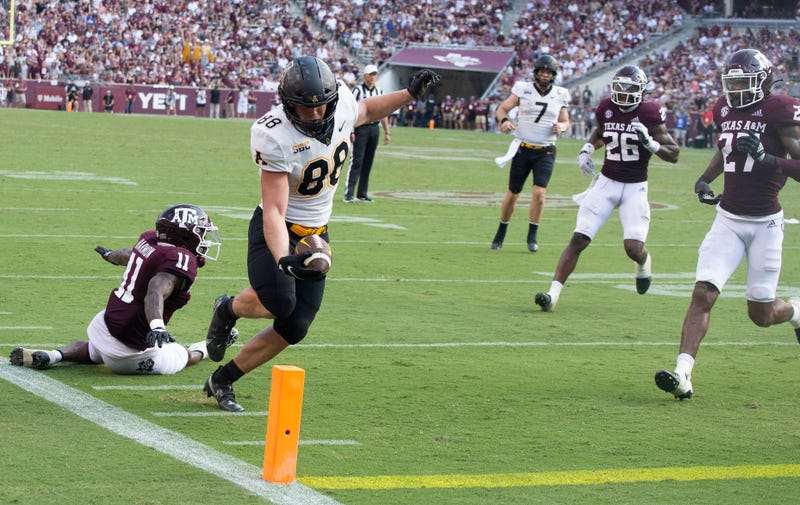 Just about 10 days after the 15th anniversary of Appalachian State's road upset of then #5 Michigan, the program got another landmark win. The Mountaineers won at Kyle Field downing #6 Texas A&M 17-14. While it wasn't the last play drama filled finish the Michigan win was, this win also had a big play in the kicking game down the stretch. Texas A&M would miss on a 47 yard attempt by Caden Davis with 3:43 left that would have tied the game.

App. State never trailed in the game and their defense was stellar shutting down the A&M offense. Just a week after the Mountaineers gave up 63 points in the loss against North Carolina last week. On Saturday, that defense was the story holding the Aggies to 186 total yards and 9 total first downs. The A&M offense managed less than 100 yards in passing. App State. was +2 in turnover margin and got off the field on 3rd down holding A&M to 2 of 8 on conversion attempts on the day.

A fumble by Texas A&M late in the 1st quarter set up a short field for the Mountaineer offense. They capitalized on it by scoring on a 4 yard TD run by Ahmani Marshall to open the 2nd quarter to take a 7-0 lead. A&M then answered with a scoring drive of their own going 75 yards on 7 plays in 3 minutes and 18 seconds. The game would go to the halftime break tied at 7.

Neither team could get anything going early in the 2nd half. App. State would re-take the lead with a long , clock chewing drive that took over 6 minutes off the clock. The Mountaineer drive went for 11 plays and 62 yards, it was capped off by a 9 yard TD pass from former Clemson QB Chase Brice.

Texas A&M would tie the game when Devon Achane took the ensuing kickoff 95 yards to the house to tie the game at 14 after 3rd after 3 quarters. The Mountaineers would put together another long methodical drive. This one went over 9 minutes and 63 yards on 18 plays. That drive was capped by a 29 yard Field Goal to take the lead 17-14.

A&M would get one more crack at it, they drove for over 4 minutes on their final possession. They would gain 45 yards on 9 plays. That set up a 47 yard FG attempt which Caden Davis was unable to connect on.

Appalachian State controlled the clock in the game and owned a 41:29 to 18:31 time of possession advantage. The Mountaineers would control the ground game as well, outgaining Texas A&M on the ground 181-89.

Chase Brice wasn't spectacular, but managed the game well and played virtually mistake free football. He went 15 of 30 for 134 yards and a TD. A&M QB Haynes King was more on target, but couldn't hit on any big plays in the passing game. He went 13 of 20 for just 97 yards, as their passing game could not get in the end zone.

Cam Peoples was the key to the App. State offensive attack on Saturday. He had 112 yards on 19 carries. He also was able to pick up a couple key first downs on their last drive that enabled them to run out the clock. Appalachian State would take the game 17-14, it is the 3rd win over a top 25 opponent in the program's history.