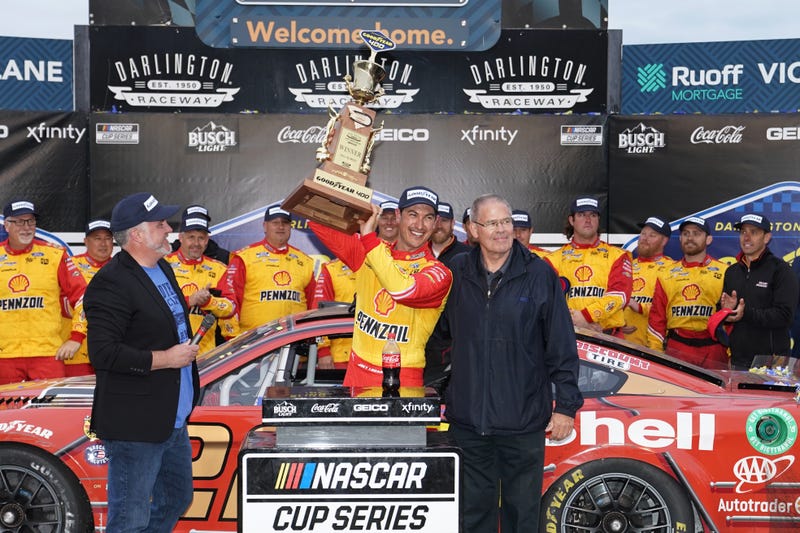 One of the biggest "heels" in NASCAR got the win at Darlington with a late race move that some found controversial. Joey Logano has become a driver that many NASCAR fans love to hate. That seems to have no effect on Logano, after he bumped William Byron late in Sunday's race. The bump would send Byron to the inner wall and allow Logano to take the checkered flag.

Logano said that the bump was retribution after Byron bumped him earlier in the race. Byron was visibly upset after the race and told Fox Sports that Logano was " a moron" and "an idiot". Byron went on to say Logano had to resort to dirty tactics because he hasn't been able to win since 2020 otherwise. (Logano did win the exhibition race in L.A., to open the 2022 season but that wasn't an official Cup Series race)

Sunday's run at Darlington was a bumpy one, the race featured multiple wrecks. The biggest crash of the day came on lap 261, it was a nine car pile up that knocked out big name drivers such as Kurt Busch, Martin Truex Jr. and Bubba Wallace.

The rest of the top 5 following Logano in order were Tyler Reddick in 2nd, Justin Haley, Kevin Harvick getting his 1st top 5 finish this season and Chase Elliott who had a strong showing after winning at Dover last week. The 6th-10 finishers in order were Chris Bell, Michael Mcdowell, Ricky Stenhouse Jr. , Austin Dillon and Daniel Suarez.

Next up, the Cup Series travels to Kansas Motor Speedway for the AdventHealth 400. That race will be this Sunday May 14th and is set to start at 3 PM Eastern.