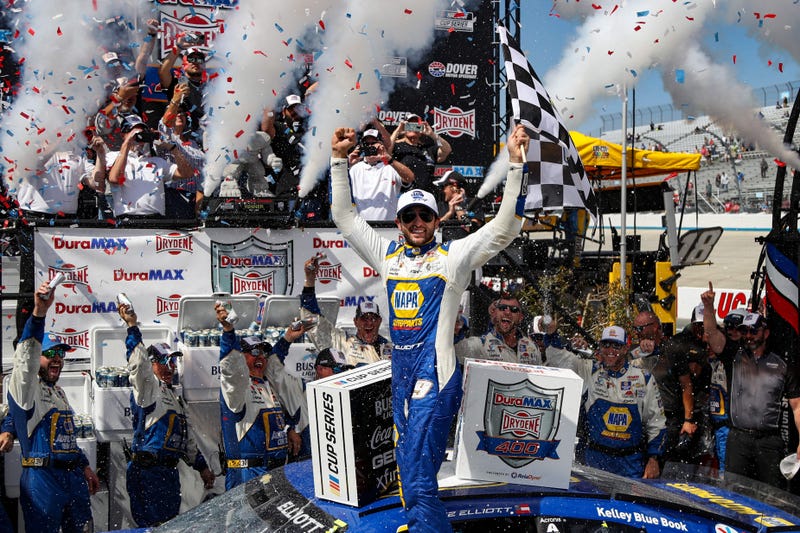 Chase Elliott got the win in Dover after the race resumed Monday, following being stopped due to rain on Sunday. His win means that all four Hendrick Motorsports drivers have won at least once in 2022. That's an incredibly impressive feat considering we are still three weeks away from Memorial Day. The Hendrick cars were dominant at Dover, with three drivers (Elliott, Alex Bowman and Kyle Larson) finishing in the top 6.

After taking the lead from Ross Chastain on a re-start, Elliott was able to maintain the top spot. He pulled away from 2nd place Ricky Stenhouse Junior down the stretch to take the checkered flag. Chastain who was coming off a win at Talladega, was able to stay in the top group even after swapping paint with Martin Truex Jr. on the last lap. Truex Jr. ended up spinning out and finishing 12th, as you can see in the tweet from NASCAR On Fox below.

Ross Chastain vs. Martin Truex Jr. on the final lap in Dover 👀 pic.twitter.com/l1Ku30tTfT

The trip to Victory Lane for Elliott broke a 26 race dry spell and was his 1st win of the 2022 season. It marks the 14th Cup Series win of his career. Following Elliott in order in the top 5 were, Stenhouse Jr., Chastain, Chris Bell, and Alex Bowman. 6-10 in order were Kyle Larson, Kyle Busch, Chris Buescher, Kevin Harvick and Erik Jones.

Next up, the Cup Series returns to the Palmetto State to run Darlington this coming Sunday