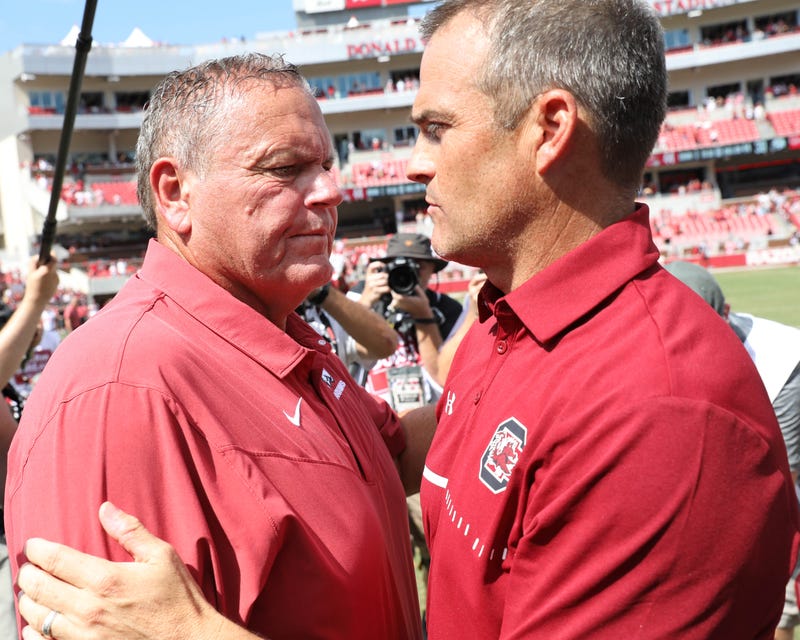 Arkansas scored 23 of their 44 total points in the game's final frame, to put South Carolina 44-30. The run game for South Carolina was again an issue for the 2nd week in a row. In South Carolina's opening game win they were outrushed 200-79. On Saturday, Arkansas rolled up 295 rushing yards, South Carolina only ran for 40 yards.

South Carolina's passing game was effective winning that category 376 to 162. QB Spencer Rattler accounted for all of those 376 yards, he completed 24 of 39 passes for a TD and a pick. Gamecock WR Antwane Wells Jr. had 8 catches for 189 yards and a TD.

The Arkansas run game got into the end zone five times on the day. Razorback RB Raheim Sanders ran for 156 yards and 2 TD's on 24 carries. They also got rushing TD's from QB KJ Jefferson, AJ Green and Rashad Dubion. Jefferson was efficient in the passing game, going 18 of 21 for 162 yards and a TD.

South Carolina competed early and after the 1st quarter Arkansas led 7-3. Arkansas would score two TD's in the 2nd quarter and South Carolina scored 6. Arkansas then led 21-9 at the halftime break.

South Carolina held Arkansas scoreless in the 3rd quarter and would get into the end zone once themselves. Arkansas would lead 21-16 after three quarters. The Razors would have a big 4th quarter and outscored South Carolina 23-14 in the final frame to win 44-30.

South Carolina's struggles to run the football continued for the 2nd straight week. South Carolina will need to figure out the run game to have offensive balance, as their biggest test of the season is coming up this week. The Gamecocks host 2nd ranked Georgia on Saturday. That one is set for a Noon kick on Saturday at Williams-Brice Stadium in Columbia.