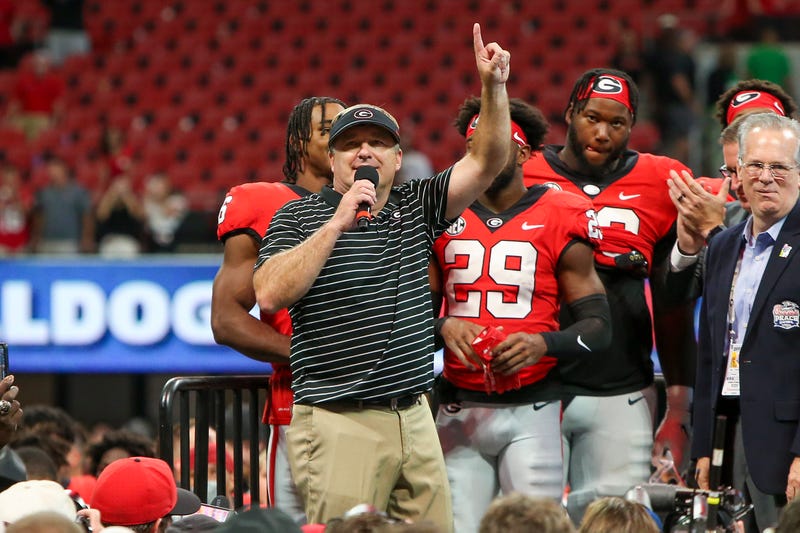 Defending National Champs, Georgia was incredibly sharp on Saturday. There was no learning curve, as the Bulldogs are replacing 5 1st round picks from their defense and 15 players from last year that were drafted by NFL teams. Georgia dominated #11 Oregon 49-3 in Atlanta, as they rolled up nearly 600 yards of total offense.

Georgia's offense has a bunch of returning talent and the young defense looks athletic and deep. The 'Dawgs looked way ahead of the curve on the defensive side. The offense has high expectations this year and they certainly delivered on those in the opener.

One thing that stood out to me, was Georgia's offense sustaining drives. It wasn't as much The Bulldogs hitting on big plays on offense, as it was them marching the field and executing along the way. The 'Dawgs had 7 TD drives on the game, with 5 of them being of 75 yards or more. Georgia even executed the late drive before the half at a high level to score with just 21 seconds left before the half. They took a commanding 28-3 lead into the halftime locker room.

The 2nd half was more of the same, as Georgia scored on Kendall Minton 12 yard TD run to open the scoring in the second stanza. Adonai Mitchell then capped a 9 play , 75 yard drive with an 18 yard TD grab. Even back up QB Carson Beck got in on the party, throwing a TD strike to Kendall Minton in the 4th to cap things off.

The playmaking law firm of Minton, Mcintosh and McConkey were big on the day for Georgia. McConkey had a 9 yard TD run to put Georgia on the board in the 1st quarter and then a TD catch to cap their drive right before the half. Kenny Mcintosh led Georgia in receiving with 9 catches for 117 yards and had a TD on the ground. Minton was their leading rusher with 8 carries for 50 yards and TD, he also had a TD catch.

Stetson Bennett has weapons around him for sure and a strong O-line which has become a trademark of the Georgia program. However, Bennett's evolution at the QB position is obvious and can't be overstated. In his time at Georgia, Bennett went from a walk on, to a game managing starter, to a leader on the offense and now seems poised to take the next step. Georgia has set the tone with their opening win, if they make a unbeaten regular season run Bennett could well be in the Heisman conversation.

Bennett thoroughly outplayed Oregon's starting QB Bo Nix on Saturday. Bennett had a monster game going 25 of 31 for 368 yards and Two passing TD's, he also had a rushing TD. To the contrast, Nix struggled going 21 of 37 for 173 yards and threw two picks. It was more of history repeating itself as Nix had struggled against Georgia when he was at Auburn. With Georgia opening with Oregon, there was the thought that former Georgia D-Coordinator Dan Lanning now the Head Coach at Oregon, might be able to use his familiarity with the 'Dawgs to his favor at least in some instances. That ended up being a total non-factor.

Georgia's new look defense with a bunch of new faces in new places, allowed just over 313 total yards and most of that was in the 2nd half when the game was already in hand. The Bulldog offense racked up 571 total yards. The run game was comparable and Oregon even had a slight advantage in rushing yards. The pass game for Georgia was on display though, they threw for 439 yards to Oregon's 173. Georgia won the turnover battle, as they were plus 2 in turnover margin and played nearly mistake free.

I think College Football Fans all over the nation were anxious to see what Georgia would look like in Week 1. Some pundits didn't know what to make of Georgia coming in. For me, I picked them coming into the season to run the regular season table undefeated and go back to the Playoff. They certainly looked the part of an elite team. This year's defense may not be what last year's historically great unit was, but they are still very fast and talented. It will be interesting to see how they improve, as the season moves along. Did want to mention that former Gaffney star D-Lineman Tyrion Ingram-Dawkins played some snaps for Georgia and had 2 tackles in the game. Georgia has Samford next week and then a road trip to Columbia to take on South Carolina.