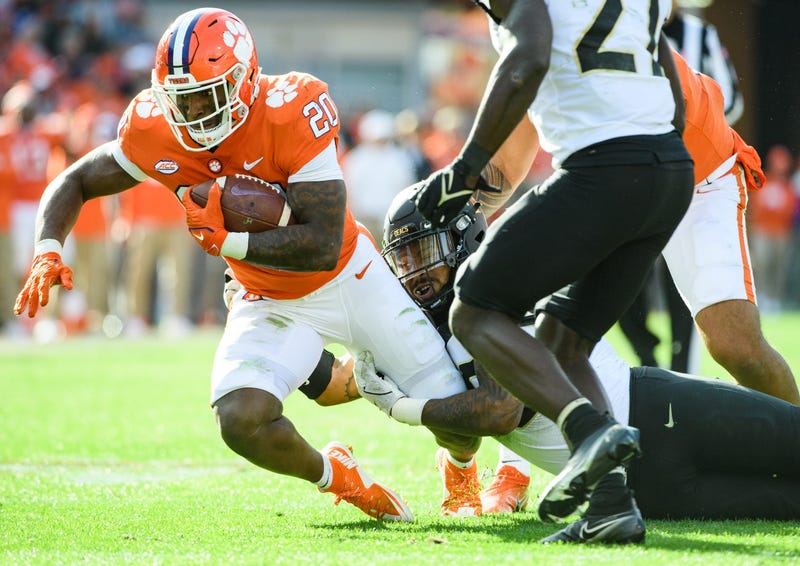 Saturday marked Clemson's most complete performance of the year. The Tigers were in control all game in route to a 48-27 win over 10th ranked Wake. Clemson's ground game was dominant and it was good decision making to stay with the run. I don't think there's much doubt Clemson's O-Line played their best game of the season, after being mediocre for much of the season. The Tigers racked up over 300 yards rushing and run defense proved again to be Wake's most glaring weakness.

When you are playing at home and looking to knock off a top 10 team, getting a hot start is paramount. Clemson did just that, as they jumped to a 10-0 lead. The Tigers dominated the 1st quarter stats and sacked Wake QB Sam Hartman four times in the 1st frame. Clemson got a FG from B.T. Potter and a TD drive capped off by a Will Shipley 1 yard TD run. That gave Clemson a 10-0 lead after a start that was as good as could be asked for.

Wake woke up a bit in the 2nd quarter. The Demon Deacons got a FG early in the 2nd to get on the board, making it 10-3 Tigers. Clemson answered with their 1st TD pass of the game. Clemson RB Will Shipley threw a TD pass on a "gadget" play near the goal line. He found TE Davis Allen to a cap a 5 minute 71 yard scoring drive. That made it 17-3, Clemson but Wake would answer with an impressive drive of their own. Wake took nearly 4 minutes and went 75 yards, RB Christian Turner punched it in with 1:22 left in the 1st half. Clemson would carry a 17-10 advantage into the half.

Kobe Pace would take over for Clemson in the 2nd half. Clemson capitalized on a short field and Pace found pay dirt from 8 yards out to open the 2nd hald scoring. Wake got a FG later in the 3rd and made the game 24-13.Clemson QB D.J. Uigalelei had his lone TD pass of the game finding Beaux Collins for 58 yard TD hook up to make it 31-13 Clemson. Inserting Collins , a former high school teammate of Uagalelei's has certainly helped the passing game. While D.J. still hasn't been stellar he looks more comfortable with Collins in the lineup. Later in the 3rd, Kobe Pace would all but shut the door when he scored his 2nd rushing TD of the game. That score gave Clemson a commanding 38-13 lead after three quarters.

To Wake's credit they never quit and kept playing hard in the 4th. The Deacons got a TD run from Quinton Cooley , they then failed on the 2 point try. Clemson answered with a nearly 8 minute drive, capped by a B.T. Potter Field Goal to make it 41-19. Wake scored on a Hartman TD pass with less than 5 minutes left, that cut the lead to two scored at 41-27. Will Shipley would put the exclamation point on the game with a TD run to make the final 48-27.

The win is not only the biggest for Clemson this season, it also keep some hope alive for them in the Atlantic Division race. Clemson needs a Wake loss at BC and a N.C. State loss to North Carolina to claim the division title. All Wake has to do is win and they take the division. They are a game up with one to play, they also beat N.C. State. Clemson not only kept their hopes alive but they created momentum. They will try to carry that forward this week, as they take on rival South Carolina to close the regular season. The battle for Palmetto State supremacy will be in primetime this year. The game is set for a 7:30 kick under the lights at Williams Brice.