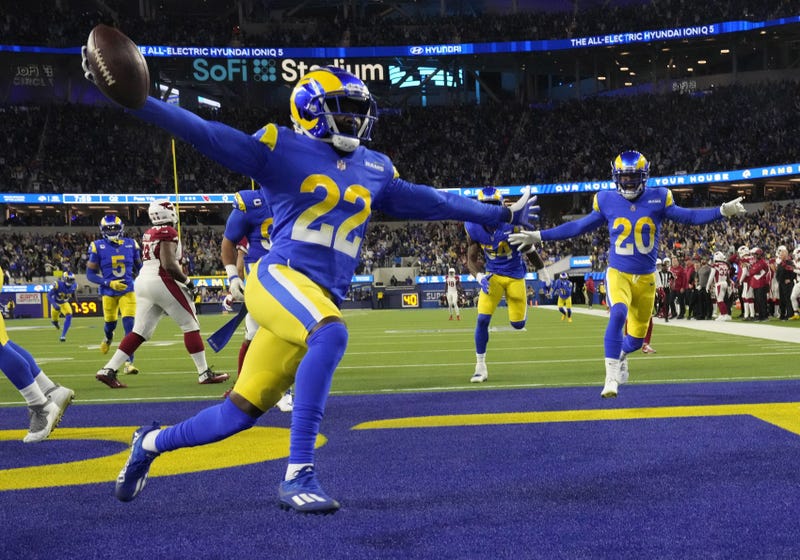 The L.A. Rams dominated in Monday night's NFL Playoff Wildcard win over Arizona. The Rams defense swarmed and suffocated the Arizona offense and made QB Kyler Murray look atrocious in his playoff debut. The Rams never trailed as they struck first Monday night to lead 7-0.

The Rams built on that lead in the 2nd quarter, they would score to go up 14-0. Then the Rams got a pick 6 from DB David Long to pretty much close the door at 21-0.

L.A. dominated the game both on the scoreboard and stat sheet. The Rams defense held the Arizona offense to 183 total yards, while gaining 375 total yards of offense. The passing game went to L.A. as well 242-137. The Rams run defense was stifling allowing the Cards to run for just 61 yards on the game, while gaining 140 yards on the ground offensively. L.A. was +2 in turnover margin for the game and had a time of possession advantage of over 11 minutes. The Rams averaged 6.6 yards per play on offense and held the Cards to 3.4, which is the lowest in the playoffs thus far this season.

Arizona QB Kyler Murray looked to be overwhelmed by the bright lights of the playoffs in primetime. Murray was 19 of 34 for 137 yards and 2 picks, in his 1st playoff start. The run game was missing in action for Arizona, as they didn't have a player run for over 30 yards. Christian Kirk led Arizona in receiving with 6 catches for 51 yards.

Veteran QB Matt Stafford wasn't spectacular but was solid on the night. Stafford never tried to do much and with his defense playing lights out, that mindset worked well. Stafford was 13 of 17 for 202 yards and 2 passing TD's. He also added a rushing TD. Odell Beckham Jr. joined an exclusive group completing a pass and catching a pass in a playoff game. OBJ completed a 40 yard pass and had 4 catches for 54 yards and a TD.

The Rams running game dominated, as their O-line was able to come off the ball and move the point of attack. RB's Sony Michel and Cam Akers combined for 113 yards on 30 carries. Cooper Kupp added 5 catches on the night for 61 yards and a score. Von Miller anchored the Rams defense with 6 tackles and a sack.

The Rams now move on and will travel to Tampa for the Divisional Round. L.A. will tangle with the defending Champs Sunday, that game is set for a 3 PM kickoff. ESPN Upstate is your exclusive radio home for the NFL playoffs in the Upstate.