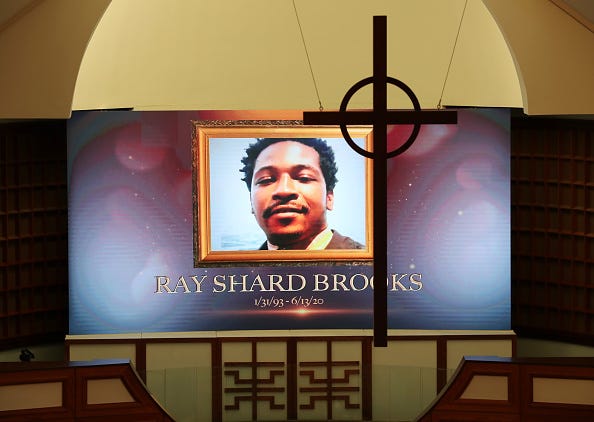 Photo of Rayshard Brooks is displayed during his funeral at Ebenezer Baptist Church on June 23, 2020 Photo credit Getty/Curtis Compton
By Maria Boynton

The City of Atlanta is agreeing to pay the family of Rayshard Brooks $1 million.

In a unanimous decision, members of Atlanta City Council voted Monday to settle the case.

27 year old Brooks was shot and killed by Atlanta police officer Garrett Rolfe on June 12, 2020. The fatal incident followed a struggle after Rolfe and another officer attempted to arrest Brooks on a charge of DUI. It happened in the parking lot of a Wendy's restaurant.

Rolfe was terminated the day after the shooting. APD Chief at the time Erika Shields resigned. About a week later criminal charges were announced by then-Fulton County DA Paul Howard against Officers Rolfe and Devin Brosnan.
A special prosecutor reversed Howard's decision earlier this year.

In announcing the settlement, City Councilman Dustin Hillis indicated that research by the city attorney concluded the city's "potential financial exposure in defending plaintiff's claims is in excess of the settlement amount."