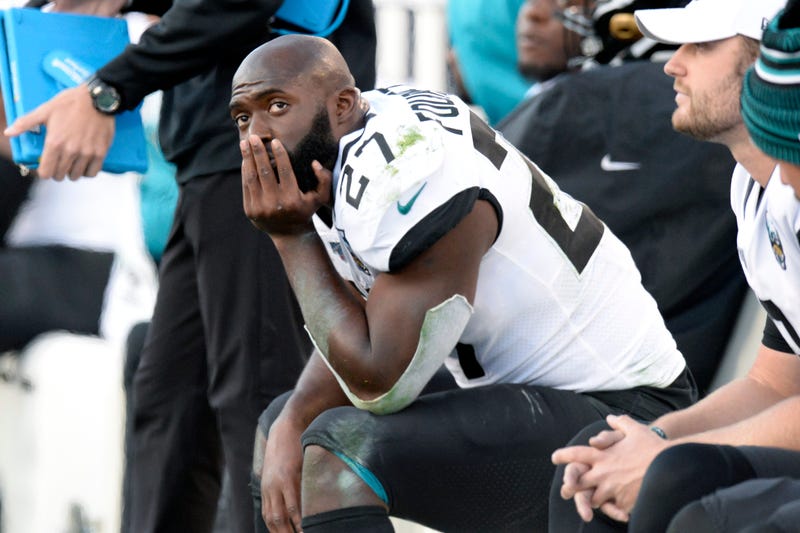 Photo credit FILE - In this Nov. 24, 2019, file photo, Jacksonville Jaguars running back Leonard Fournette (27) sits on the bench in the first half of an NFL football game against the Tennessee Titans, in Nashville, Tenn. The Jacksonville Jaguars have waived running back Leonard Fournette, a stunning decision that gets the team closer to purging Tom Coughlin's tenure. (AP Photo/Mark Zaleski, File)
By The Associated Press

TAMPA, Fla. (AP) — Leonard Fournette feels he and the Tampa Bay Buccaneers are an ideal match.

The former Jacksonville running back practiced with his new team for the first time Tuesday, and the two-time 1,000-yard rusher is excited about having an opportunity to revitalize his career in a talented offense led by six-time Super Bowl champion Tom Brady.

“I just think me coming to Tampa made perfect sense,” Fournette said, speaking for the first time since agreeing to terms with the Bucs after being released by the Jaguars last week. “I feel they had all the keys that I need and vice versa. I could help the team out, and also they can help me. ... It’s a perfect fit for me."

“I think this probably will be one of my first seasons running in probably a six-man box,” the fourth overall pick in the 2017 draft said.

“The defense has to game plan against eight guys and not just one,” Fournette added. “I think that opens a variety of things for a lot of guys on our team."

And he’s certainly not underestimating the value of joining forces with Brady, a three-time league MVP who led New England to nine Super Bowl appearances over the past 20 seasons.

“For the first time in my life I really have a quarterback, so that’s an outlet for me. Not a lot of pressure’s going to be on me,” said Fournette, who as a rookie helped the Jaguars reach the AFC championship game against Brady’s Patriots.