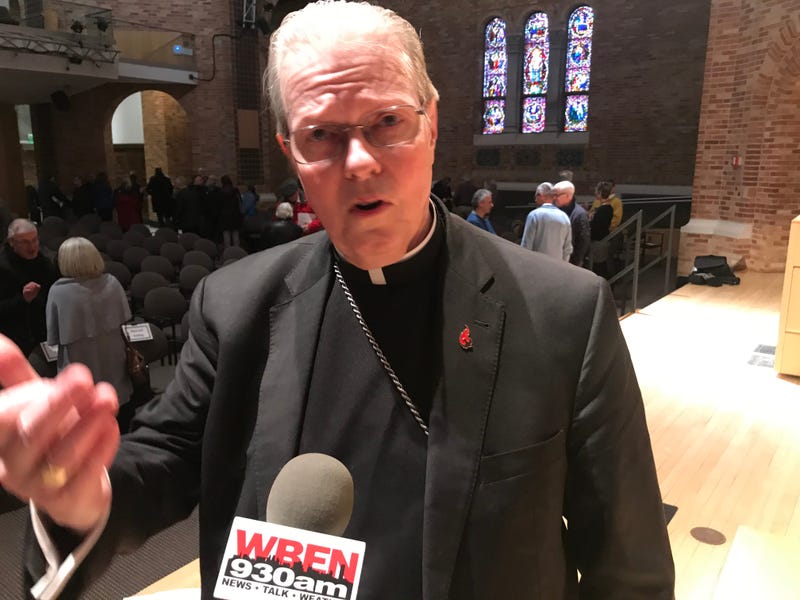 Buffalo, N.Y. (WBEN/AP) - As Bishop Edward Scharfenberger begins his second month serving as the Apostolic Administrator for the Diocese of Buffalo, many issues concerning the priest abuse scandal, lawsuits and likely bankruptcy continue to be the focus of his work.

Scharfenberber, the Bishop of the Diocese of Albany, is spending time in the Buffalo Diocese each week and joined WBEN LIVE in-studio for an hour on Monday. What did the Apostolic Administrator have to say?

On what those within the Diocese of Buffalo are asking of him:

On how long he expects to be the Apostolic Administrator in Buffalo:

"I'll stay as long as you need, but I think the sooner the better to appoint a permanent successor... Maybe announce it by Easter would be good. That's a good transition point... I know that the Holy See wants to move quickly on this."

Scharfenberger added that he is not lobbying to become the permanent Bishop in Buffalo, and sees his role here as temporary.

On making a decision to file for Chapter 11 Bankruptcy protection:

"I'm concerned about the effect this has on victims and survivors of sexual abuse, particularly those that may have filed through the Child Victims Act. Once a bankruptcy proceeding is filed, it stops the discovery process. Will that silence the voice of victims?"

Retired Pope Benedict XVI has broken his silence to reaffirm the value of priestly celibacy, co-authoring a bombshell book at the precise moment that Pope Francis is weighing whether to allow married men to be ordained to address the Catholic priest shortage.

Benedict wrote the book, “From the Depths of Our Hearts: Priesthood, Celibacy and the Crisis of the Catholic Church," along with his fellow conservative, Guinean Cardinal Robert Sarah, who heads the Vatican's liturgy office and has been a quiet critic of Francis.

The French daily Le Figaro published excerpts of the book late Sunday; The Associated Press obtained galleys of the English edition, which is being published by Ignatius Press.

Benedict’s intervention is extraordinary, given he had promised to remain “hidden from the world” when he retired in 2013 and pledged his obedience to the new pope. He has largely held to that pledge, though he penned an odd essay last year on the sexual abuse scandal that blamed the crisis on the sexual revolution of the 1960s.

His reaffirmation of priestly celibacy, however, gets to the heart of a fraught policy issue that Francis is expected to weigh in on, and could well be considered a public attempt by the former pope to sway the thinking of the current one.

The authors clearly anticipated that potential interpretation, and stressed in their joint introduction that they were penning the book “in a spirit of filial obedience, to Pope Francis."

Francis has said he would write a document based on the outcome of the October 2019 synod of bishops on the Amazon. A majority of bishops at the meeting called for the ordination of married men to address the priest shortage in the Amazon, where the faithful can go months without having a Mass.

Francis has expressed sympathy with the Amazonian plight. While he has long reaffirmed the gift of a celibate priesthood in the Latin rite church, he has stressed that celibacy is a tradition, not doctrine, and therefore can change, and that there could be pastoral reasons to allow for a exception in a particular place.

Benedict addresses the issue head-on in his chapter in the brief book, which is composed of a joint introduction and conclusion penned by Benedict and Sarah, and then a chapter apiece inbetween. True to his theological form, Benedict’s chapter is dense with biblical references and he explains in scholarly terms what he says is the “necessary" foundation for the celibate priesthood that dates from the times of the apostles.

“The priesthood of Jesus Christ causes us to enter into a life that consists of becoming one with him and renouncing all that belongs only to us," he writes. “For priests, this is the foundation of the necessity of celibacy but also of liturgical prayer, meditation on the Word of God and the renunciation of material goods.”

Marriage, he writes, requires man to give himself totally to his family. “Since serving the Lord likewise requires the total gift of a man, it does not seem possible to carry on the two vocations simultaneously. Thus, the ability to renounce marriage so as to place oneself totally at the Lord’s disposition became a criterion for priestly ministry.”

The joint conclusion of the book makes the case even stronger, acknowledging the crisis of the Catholic priesthood that it says has been “wounded by the revelation of so many scandals, disconcerted by the constant questioning of their consecrated celibacy.”

Dedicating the book to priests of the world, the two authors urge them to persevere, and for all faithful to hold firm and support them in their celibate ministry.