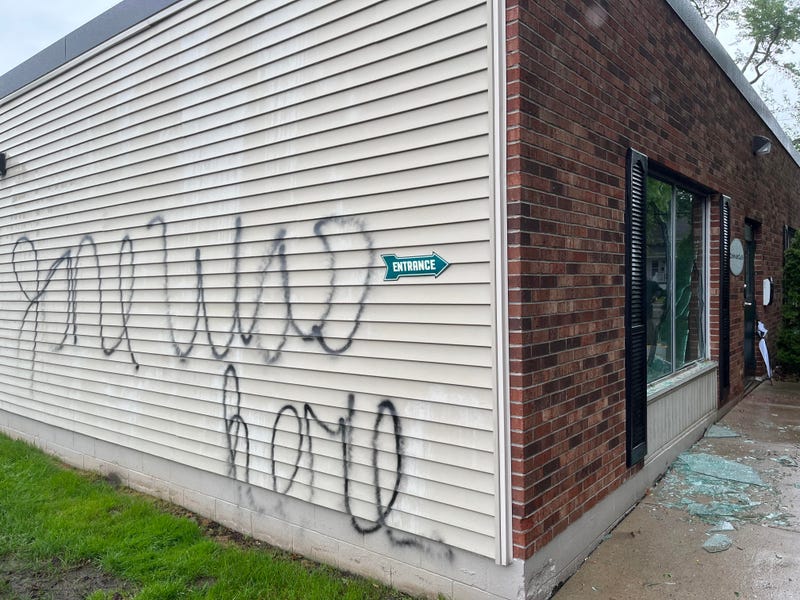 Amherst, NY (WBEN) - Amherst Police and the FBI are investigating an arson that occurred at the CompassCare on 1230 Eggert Road that the organization is calling a firebombing.

The incident took place early Tuesday around 3 a.m. and resulted in injuries to two firefighters. Four separate fire departments responded to the scene.

CompassCare, which refers to itself as a pro-life woman's medical office, said that windows in the reception room and nurses’ office were broken and fires were lit inside the facility. Graffiti was also left on the building that reads, "Jane was here."

"The fires essentially, were contained to the medical side of the of the office, but the smoke damage was extensive throughout, as well as a lot of fire damage. We're pretty sure all the equipment has been destroyed. We're not sure we haven't been able to get in and turn it on, all of our power is out," said CEO of CompassCare, Jim Harden.

CompassCare says they believe the graffiti points to a group called "Jane's Revenge," which reportedly claimed responsibility for a similar May attack on a Wisconsin Family Action building in Madison, WI.

The organization vowed to continue the carnage in other states as the Supreme Court decision reversing Roe v. Wade is near and has been promoting to their followers a "Night of Rage," if the Supreme Court does overturn the benchmark decision.

"They have said that they would strike again in different parts of the state on the lead up to the potential of Roe vs. Wade being overturned and they have done that here," said CEO of CompassCare, Jim Harden. "We're not sure exactly who's done it. The FBI is investigating. They have been involved for the last two weeks as well as the the Amherst police. This has been an ongoing concern. We have been threatened online and in person on multiple occasions and we were concerned that this would escalate and so obviously it has."

"CompassCare is a pro-life medical office. We provide baseline medical care, OB care, STD testing and treatment and abortion pill reversals to women seriously considering abortion. We give them comprehensive community support, all for free. When they destroy this facility and destroyed they have they eliminated the ability for women to receive free care, the care they so desperately need and deserve," Harden said.

Harden said he wonders why nonprofit centers like his are getting investigated into while abortion clinics are getting funds for increased security.

"What's even more deeply disturbing is the fact that last week, the legislature passed a law investigating peaceful nonprofit pro-life pregnancy centers just like this one. Why? What for? Where are the legislators today? Where's Governor Hochul's $35 million that she's giving to all the for profit abortionists for their security? We haven't gotten a single dime for security, not a single dime. Well, you know what? It's shameful what these abortion activists have done, but it's even more shameful that you don't hear a denunciation of this violence of pro-life pregnancy centers, from the sources of power. Where is the legislature?"

Harden says the damage done to the facility could take months to complete and is unusable in it's current state. They are reopening at an undisclosed location starting this Wednesday. Patients will be notified.

Harden calls for politicians to speak out and condemn the violence against centers like his.

The Amherst police news release announcing the investigation did not include a suspected motive. The FBI declined to comment on whether it was involved in the arson investigation.

In an emailed statement, Gov. Kathy Hochul's office said the governor "condemns violence of any kind, and the State Police stand ready to assist local authorities with the investigation.”

To listen to audio of the briefing, see the player below:

Amherst Police are requesting anyone with information to contact them at 716-689-1322.