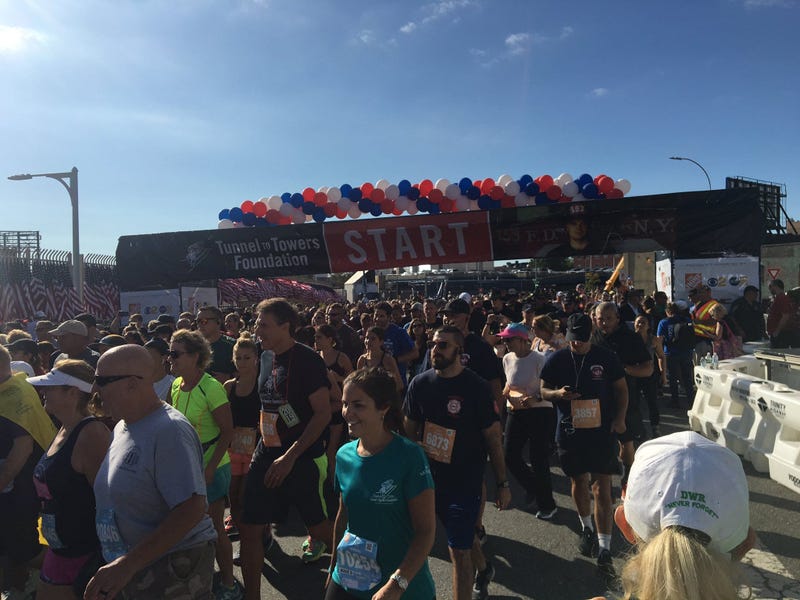 NEW YORK (WCBS 880) – Some 30,000 runners made their way through the Brooklyn–Battery Tunnel to the World Trade Center in Manhattan in an annual tribute to firefighters killed on Sept. 11.

Firefighters wearing helmets and bunker gear chanted “USA!” before the runners started in Brooklyn and made their way through the tunnel.

The runners retraced the footsteps of Siller, an off-duty firefighter who died at the World Trade Center after running through the tunnel to help rescue people on 9/11.

VIDEO. Here’s the start of the 18th Stephen Siller @Tunnel2Towers run. Firefighters in front are wearing their gear, as @FDNY Siller did on 9/11. Foundation raises money for grievously wounded vets and families of fallen first responders and vets. @wcbs880 pic.twitter.com/kFfrEL3b3N

John Walsh retired from the FDNY after 28 years but he still makes the run.

“Going through the tunnel and running past all the people that are holding their flags—guys I worked with, guys I played football with—it’s inspiring,” Walsh said. “I do it ever year. Because I’m here, I can do it.”

Frank Siller started the @Tunnel2Towers Foundation in memory of his @FDNY brother Stephen, who was killed on 9/11. From humble beginnings, the group has become a philanthropic juggernaut, raising $125-million. The 18th T2T Run was this morning. @wcbs880 pic.twitter.com/MoGxmkELFw

Banners with images of the 343 firefighters killed on 9/11 line the route.

Edwin Paulo was wearing a fire helmet and bunker gear as he made the trek.

“You start thinking about how Stephen Siller did it on 9/11. He didn’t think twice. We’re following his footsteps,” Paulo said.

Firefighters from around the world, retired @FDNY and wounded vets are among the 30,000 people taking part in the Stephen Siller @Tunnel2Towers Run. The run retraces the footsteps of Siller, who was killed at the #WTC on 9/11. @wcbs880 pic.twitter.com/kc8OrhjwVT