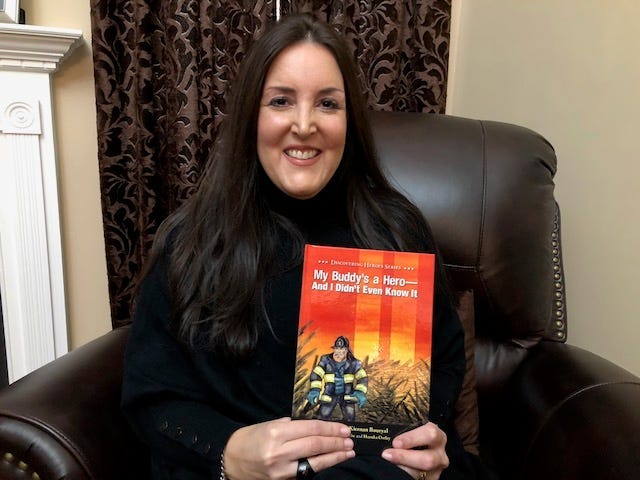 NEW YORK (WCBS 880) — For the people who lived through the terror attacks on September 11, 2001, the memory remains fresh even as time ticks away.

The effects of that day still linger, nearly 18 years after the attack. But, it seems there still isn’t a way to properly teach the next generation about what exactly happened on that day.

“We have a generation of children who know next to nothing about that day, yet it's a day that has profoundly affected so many people and continues to as we continue to lose people to 9/11 illnesses,” said Kristie Kiernan Bouryal.

In this week’s “Stories From Main Street,” WCBS 880’s Sean Adams spoke with Bouryal about why she felt compelled to educate children, aged 7 to 11, about one of the darkest days in America.

As a former news reporter, she was no stranger to storytelling and with the help of her father, retired FDNY Lt. John Kiernan, she became an author.

“I was very close to people that we lost that day. My father had a very personal experience with it and I just felt a responsibility to do it, to help kids to increase their awareness to September 11th, but also to help them to see that there are everyday heroes all around them,” Bouryal explained.

Her father retired one month before the attacks, but noticed that as the years went on, it has yet to be widely taught in schools.

“They’re not teaching it in any of the schools, they’re not talking about it anywhere. If anything, they don’t even do a moment of silence, everyone’s trying to stay away from it like it’s a political situation,” said Kiernan. “She was just wanting to bring, you know, a little bit of truth back, and a little bit of the goodness that came out of what happened on 911.”

“It seems to be left to the discretion of the individual teachers and to me, that's not enough,” Bouryal noted. “I needed to create a vehicle that can help a parent, teacher, an aunt, an uncle, grandparents to be able to share what happened that day in a caring way and create a dialogue about it. So, I hope that this is a vehicle that can help them to do that.”

Bouryal wanted to base the book on her father’s experiences, but it was a tough sell.

“I don't really like to discuss it, I don't like to talk about what, you know, what went on. I usually never brought my fires home or my emergencies. But somebody had to do it and I'm glad it's not necessarily me. I’ll offer some insight but, they're telling the story, not me.”

The first book, according to Bouryal, is a retelling of her father’s experiences on 9/11. It covered everything from how he got there, the team he worked with to rescue victims and the last man that came out of the building.

The humble grandfather in the story also answers in a delicate, gentle manner that won't frighten a child.

Bouryal has plans to create more books for the series, “Discovering Heroes.” She says she wants to educate children not about the horrors of a terror attack, but of the heroes that are walking among them.