TJ Minutillo, a 21-year-old college student from Manhasset, tells WCBS 880's Sophia Hall that he caught the nearly 400-pound bull shark while fishing off of Lido Beach on July 19.

"It didn't try to bite me, it was pretty tired," he said. "I've heard rumors that people had caught them in New York before but no confirmed pictures, nothing like that. So as far as I know it's the first one. We didn't know if it was a bull at first, but then we did some research." 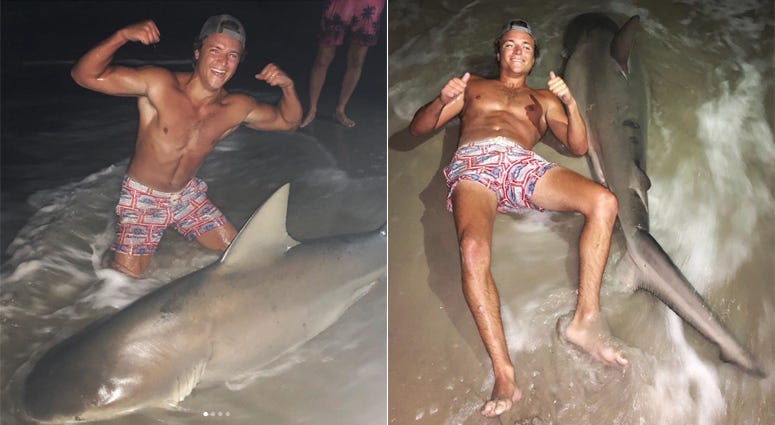 Minutillo said he struggled with the shark for two hours before releasing it back into the water.

It is not known whether it was the same bull shark said to have been spotted in the waters off Nassau County this week among a series of sightings that have spotted swimming bans all along the South Shore for three consecutive days.

Bull sharks can grow to be 14-feet long and are known to be aggressive.

"They're aggressive in their own environment against other sharks, against oceanic creatures, against their prey. They're not necessarily saying that they're the most aggressive toward humans," said Chris Stefanou, who is known as the "Long Island Shark Man." 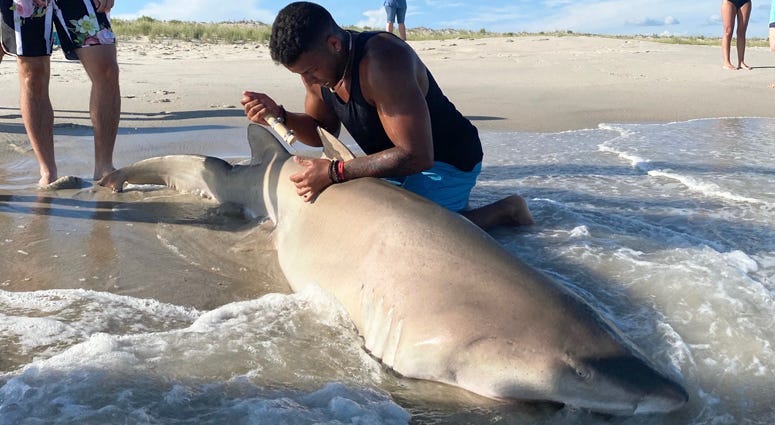 Stefanou has been working with the National Oceanic and Atmospheric Administration for the past seven years — catching, tagging and releasing sharks to monitor their movements.

He said bull sharks have slowly moved their way up from Florida's waters to Long Island because of the warmer temperatures.

"The second you get into these waters on Long Island around July to August, you've been swimming with sharks," Stefanou told Hall. "You couldn't even imagine the amount of sharks that are in the water while we're swimming that nobody sees."

Nassau County police helicopters and marine units have increased patrols to help alert beachgoers and swimmers to the presence of any sharks following at least seven shark sightings this week.

Officials are advising beachgoers to stay close to the shore, swim in groups and go into only waist-deep water for now.

They should also refrain from wearing shiny jewelry, which sharks can mistake for the scales of a fish, and Stefanou also cautions against wearing black wetsuit which could be mistaken for a seal.

Meanwhile, researchers have been tracking a 10-foot long great white shark nicknamed Miss May off the coast of Atlantic City this week. The group Ocearch said she usually heads up around Montauk and into the Cape Cod area every year from Florida.

On Monday, a New York City woman was killed by a great white off the coast of Maine.