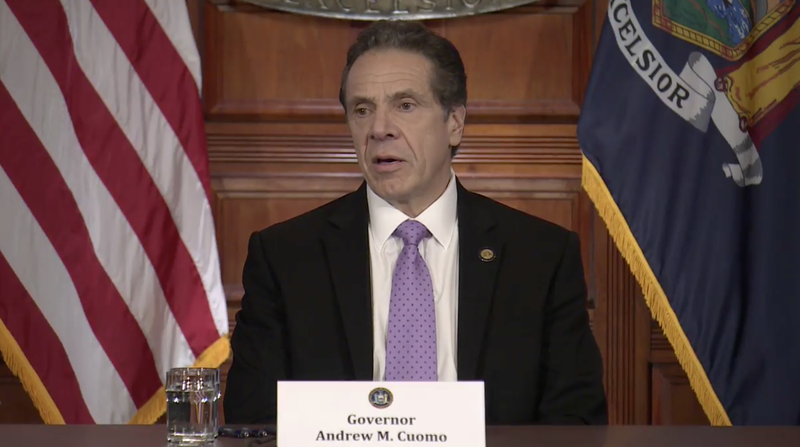 NEW YORK (WCBS 880) -- Gov. Andrew Cuomo said on Tuesday morning that the rate of increase of coronavirus in New York is doubling every three days, and that the apex of the crisis will likely be higher and sooner than previously thought.

At a press conference at the Javits Center, where an emergency hospital is being set up, Cuomo said new projections show that the apex of the virus may hit in 14 to 21 days and that the state may need 140,000 hospitals beds and 40,000 ICU beds.

"I will turn this state upside down to get the number of beds we need," Cuomo said, saying he would consider using CUNY and SUNY dorms and hotels as emergency beds.

Previously, the governor had said that the state was likely to need 110,000 beds and the peak of the virus was more likely to hit in about 38 days.

"We haven't flattened the curve, and the curve is actually increasing," Cuomo said.

The apex of this pandemic is higher & sooner than we thought.

We are scaling hospital capacity as fast as humanly possible.

I will turn this state upside down to get the hospital beds we need.

He vigorously encouraged the federal government to use the Defense Production Act to require companies to build more ventilators and to release 20,000 ventilators in an emergency stock pile to New York.

"How can we be in a situation where you can have New Yorkers possibly dying because they can't get a ventilator, but a federal agency saying, 'I'm gonna leave the ventilators in the stock pile,'" Cuomo said.

Referring to the news that FEMA was sending 400 ventilators to the state, he forcefully argued that it was not enough.

The governor said that, today, the state was beginning drug therapies using hydroxychloroquine and zithromax to treat the virus, as well as plasma therapy to hopefully pass antibodies of people who have already beaten the virus to those who are still fighting it.

Cuomo also said that hospitals are experimenting with sharing ventilators between two patients.

The governor said that New York City has put together a plan to reduce outdoor density, and that it will be in place on Tuesday afternoon.