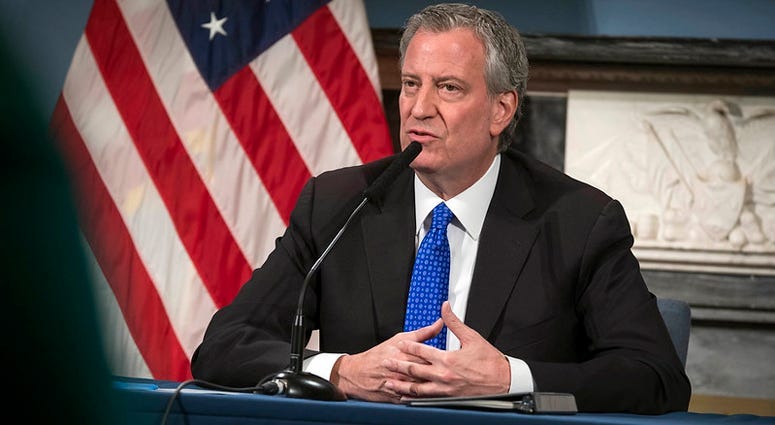 NEW YORK (WCBS 880) — New York City Mayor Bill de Blasio announced that he plans to throw a ticker tape parade in the Canyon of Heroes to honor health care workers and first responders once the coronavirus pandemic is over.

"We will honor those who saved us. The first thing we will do before we think about anything else is we will take a time as only New York City can do to throw the biggest, best parade to honor these heroes," de Blasio said Tuesday. "I think this will be the greatest of all the parades, because this one will speak to the rebirth of New York City."

I can’t tell you when we’ll be able to host cultural events and parades again. But I can tell you WHO our first parade will be for:

When the time is right, New York City will honor our health care workers and first responders with a ticker tape parade up the Canyon of Heroes.

The parade will happen only when it is safe to hold large gatherings again.

The news comes after de Blasio canceled major events, including marathons, parades and concerts, for May and June.

In the hopes that those frontline workers will never have to face a challenge of this magnitude again, the mayor also announced Tuesday that the city is building a strategic reserve of critical medical equipment and supplies, including face shields, surgical gowns, gloves, test kits and ventilators.

"We certainly cannot depend on the global market, we can't depend upon our nation to produce products that tragically are not being produced enough in this nation as we've seen in our hour of need," de Blasio said. "I hope that will change, I hope our country gets message that we have to start producing these things all over the country again and be self-sufficient as a nation, but until that day comes New York City we will protect ourselves."

The city faced serious shortages of face masks, gowns and ventilators when the pandemic hit and the mayor said one of the big lessons of this pandemic is to be ready for the next health emergency.

De Blasio says a partnership with businesses in the city addressed the shortfall, but he wants to take steps to prevent a repeat of the situation in any future health emergency.

Some of the supplies will be made in the city.

"And we will purchase what we need and create a stockpile, so we will never be in a situation where we turn to those who are supposed to supply this and they say, 'Sorry, we are all out,'" de Blasio said.