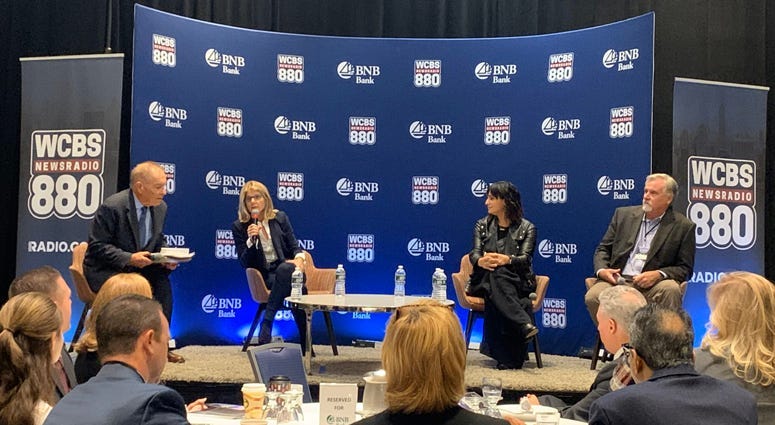 NEW YORK (WCBS 880) -- Two major themes emerged at Thursday's WCBS BNB Bank Business Breakfast on Long Island — the advantages of being local and getting noticed with your own unique business story.

.@BluePointBrewer founder Mark Burford says customer feedback is important in improving their product, but you cannot be consumed by online reviews. #WCBSBizBreakfast pic.twitter.com/E2nQtUvx8X

Burford said years ago people would ask if the locally made beer would make them sick and now local is a point of pride.

King built a chocolate chip cookie and bakery empire from scratch, but it wasn't always easy. She says when she was knocking on doors to get Tate's cookies into stores, occasionally someone would say "What makes you think these are good?"

“You believe in your own product, you believe in yourself. I love proving people wrong.” - Kathleen King, founder of @TatesBakeShop tells @JoeConnollybiz how she has persevered throughout her career. #WCBSBizBreakfast pic.twitter.com/mx1XARvKf7

Rather than debate with them she would just say, "I think they're good" and walk out, thinking to herself, "They'll be calling me someday!"

Man of the people: @JoeConnollybiz is wading his way into the audience at the #WCBSBizBreakfast! In the traditional “who’s up/who’s down” poll, a majority of the owners are growing their businesses - namely financial services, aviation and technology. pic.twitter.com/03slIqbNB6

Connolly reports it seemed like more business owners compared to the previous breakfast in June said business is up — namely in financial services, aviation and technology.

"When I asked is anybody seeing signs of a slowdown only two business founders raised their hand and one told me later the last eight months have been great it was due to slow," Connolly said.