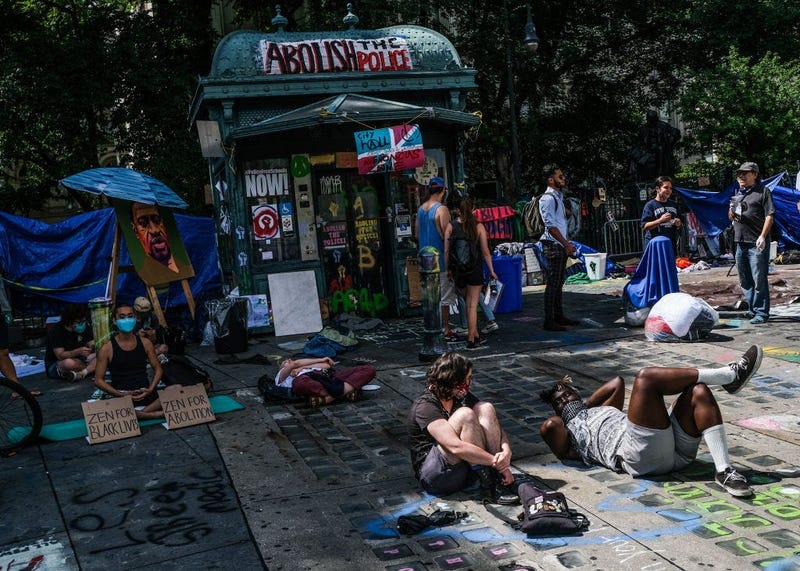 NEW YORK (WCBS 880) — Mayor Bill de Blasio on Tuesday said the encampment outside City Hall is permitted to stay for now, but noted the NYPD could disband it at any time.

The “Occupy City Hall” encampment set up on the sidewalk outside the Lower Manhattan building about a month ago. Sparked by the death of George Floyd in Minnesota, the group has been demanding an end to police brutality and aims to put pressure on city lawmakers to enact social reforms.

Since it began, protesters have been seen attacking police officers, targeting members of the media and vandalizing a number of buildings with graffiti.

When asked by WCBS 880’s Rich Lamb as to how long the encampment will be around, Mayor de Blasio seemed to pass the decision to police.

“There is a balance we always strike between the right to protests and especially public safety and I always put public safety first while respecting constitutional rights,” the mayor said. “That decision will be made by the NYPD as things emerge.”

Buildings that have been struck by graffiti include the Department of Education, the Segregate’s Court and the David N. Dinkins Municipal Building.

Mayor de Blasio said he respects the right to protest but notes the vandalism needs to stop.

“The graffiti is just not acceptable, and I want to be very clear, graffiti on public buildings will be removed, period,” the mayor said.

He notes that typically, the city does not allow encampments, but this one is unlike others.