NEW YORK (WCBS 880) — Gov. Andrew Cuomo on Tuesday announced the National Guard will be deployed to New Rochelle to help deal with the coronavirus outbreak.

The governor made the announcement in Albany while confirming the state had reached a total of 173 positive cases of the virus.

He notes that New Rochelle is the most impacted are in the state with a total of 108 cases — many of them linked to a 50-year-old attorney who was among the first patients in New York diagnosed with COVID-19. 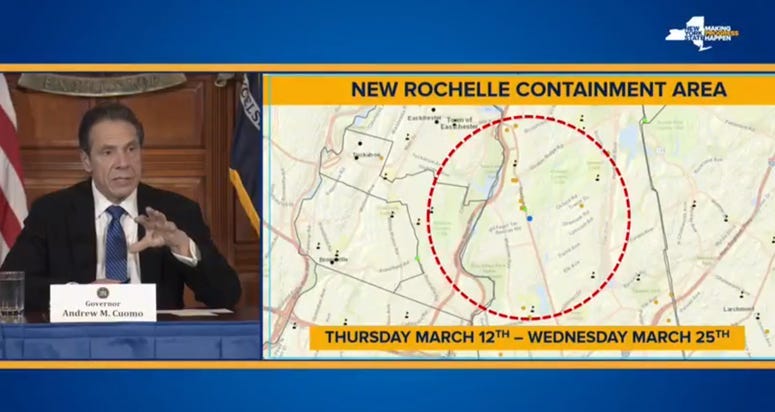 To help control the spread of the virus in the area, Cuomo said there will be a containment zone in New Rochelle extending in a 1-mile radius from around a point near the Young Israel of New Rochelle synagogue, which is linked to several cases. The National Guard will be deployed to that area to deliver food and assist in cleaning surfaces. The center will be “the situs of the majority of the cases.”

"The largest cluster of confirmed coronavirus cases in the country is located in New Rochelle, and as the numbers continue to go up we need a special public health strategy to contain it,"  Cuomo said. "We are moving from containment to mitigation, and because much of the transmission of this disease tends to happen on a geographic basis, we are attacking this hotspot at the source."

Beginning March 12, there will also be a two-week period in which all public facilities within the containment zone will be closed – including all schools and houses of worship.

“This can’t be a political decision. This is a public health decision. It’s not a decision that I am making, I’m accepting the recommendation of (Dr. Howard Zucker),” Cuomo said.

In Albany giving another update on #Coronavirus. WATCH: https://t.co/IDybwlF7JR

Business owners in the containment area, who have been suffering since the outbreak was linked to the synagogue, were stunned by the move.

Enrico Russo, who has owned Maestro's Restaurant for 33 years, was first told he'll have to shut down and was later told he could stay open, but he says it's hard to stay open when nobody's around.

"Last week was bad, but the week before was better, now it's dropping down. You can see there's nobody here and it's frustrating," Russo said.

Pino Derasmo who has owned Pino's Hair Salon for 51 years said business is down 60 percent and if customers don't come back soon he'll be in trouble.

"It's terrible for business cause people are scared, they don't come," Derasmo said.

Meanwhile, the state and a private health system will be setting up a temporary testing facility in New Rochelle.

Gov. Cuomo said he understands that the closure will cause a disruption in the area, but that it needs to be done to slow the spread of the virus. He's hoping to give scientists more time to study the virus and come up with the best recommendations for those who have been sickened.

“It is a dramatic action but it is the largest cluster in the country and this is literally a matter of life and death,” the governor said.

He stressed that the virus is still very new to the world and that many doctors are in disagreement as to how long the virus can live on hard surfaces. Because of this, Cuomo is asking all public transportation agencies in the state to double down on cleaning and sanitization efforts.

"It is a significant issue for us," Cuomo said. https://t.co/lWzBjjaSOp pic.twitter.com/4rj7Qt74n0

While New York had the largest number of confirmed COVID-19 cases on Monday, Washington State reached 179 on Tuesday, surpassing our area. The state also was confirming 22 deaths.

New York has yet to report any deaths and Gov. Cuomo notes that the fatalities in the Pacific Northwest highlight the largest issue: senior citizens are the most at risk for the coronavirus. The 22 deaths in Washington were connected to a senior living facility.

Cuomo notes only 14 people of the 173 sickened are hospitalized, many people are at home recovering from flu-like symptoms.

Gov. Cuomo ended the press conference by stressing that the hand sanitizer being produced by the state is not being sold for profit.

“You cannot joke. Do not joke. Whenever you joke you get in trouble,” Cuomo said. “Hand sanitizer that we presented yesterday – the state is not making a profit from the sale of hand sanitizer. The hand sanitizer is not for sale.”

He said any comment about the state profiting from the products is untrue.