Long Island-based Kollectico said portions of the proceeds will go towards the American Civil Liberties Union. Ginsburg, who died Friday of complications from metastatic pancreatic cancer, helped co-found the Women's Rights Project at the ACLU and served on the ACLU's General Counsel in the 1970s.

The 7-inch tall bobblehead will feature Ginsburg in her robe of justice and a pair of designer shoes, holding a gavel and the U.S. Constitution standing before a banner highlighting famous Supreme Court cases, including U.S. v. Virginia, Ledbetter v. Goodyear and Bush v. Gore.

The bobblehead is hand-sculpted and hand-painted.

The company said each bobblehead is individually numbered out of 1,993 — the year President Bill Clinton nominated Ginsburg to the Supreme Court.

Ginsburg was a diminutive woman who was a legal giant and along the way, the Brooklyn native and women's rights champion became a pop culture icon, affectionately known as the "Notorious RBG" by her many fans and admirers.

Andrew S. Hazen, Founder & CEO of Kollectico, said creating the bobblehead in her honor was a no-brainer.

"Myself also being an attorney, once RBG had passed, I knew in a nanosecond we must memorialize her and design and create a bobblehead, which we did pretty much in 48 to 72 hours," Hazen said. "People throughout the entire country really respect what she's done for the citizens of this country." 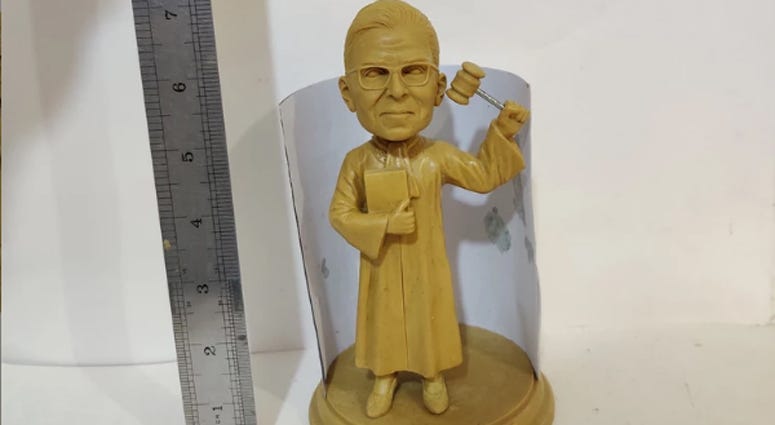 The company makes over 100,000 bobbleheads a year. They've immortalized plenty of people in plastic, from sports stars to pro wrestlers and even presidents, but never a Supreme Court justice — until now.

"We've been designing and manufacturing bobbleheads for 12-plus years, producing both licensed and non-licensed bobbleheads, we've done political legends in the past... We've made many, many people, but this is our first Supreme Court justice," Hazen tells WCBS 880's Peter Haskell.

"If everything goes well, we'll be writing a pretty sizable check if we're able to sell out the entire collection," Hazen said.

The bobbleheads are available for pre-order and are expected to be shipped out in November or December.

Over the weekend, Gov. Andrew Cuomo announced New York state will honor the life and legacy of the women's rights champion with a statue in her birthplace of Brooklyn.